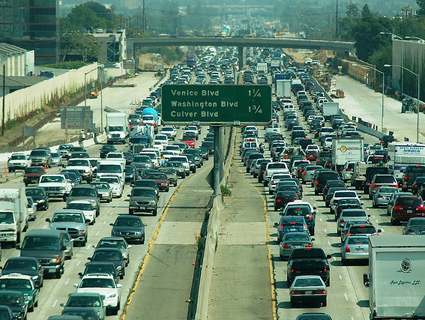 Midnight tonight marks the beginning of Carmageddon in Los Angeles: For two days and five hours, Interstate 405 between I-10 and US 101 will be completely shut down. Since the 405—and yes, we always use “the” in front of our freeway numbers in Southern California—is the main artery between Los Angeles and the San Fernando Valley, everyone expects total chaos as drivers jam up every available alternate route into the city (and into LAX, which is, inconveniently, located right on the 405). City and transit officials are treating this about the same way they’d treat a tsunami warning, telling residents in increasingly apocalyptic tones to either leave town or else just stay inside for the duration. Their message, broadcast across every medium known to science for the past two months, is pretty simple: Don’t even think about taking your car anywhere if you live within a 30-mile radius of the construction.

So what’s the reason for this mind-boggling closure? Answer: Caltrans is adding a 10-mile northbound car-pool lane to the freeway. The Los Angeles Times‘ architecture critic, Christopher Hawthorne, has some questions about this:

To begin with: Is widening the 405 (to add one solitary carpool lane on the freeway’s northbound side) really something that we should be spending $1 billion on? Will it actually make traffic through the pass better? And if so, for how long?

After all, study after study has shown the ineffectiveness of this approach. As soon as you open up new lanes, drivers adjust: A few more decide to take the newly widened route each day, and before long the congestion is just as bad as before.

In this case, because an HOV lane is being added, some of the change in behavior will be virtuous, turning drivers into passengers. It’s still tough to think of a less cost-efficient way to spend a billion dollars of public money.

Actually, it might be even worse than Hawthorne thinks. For the past two decades Los Angeles has gone on a binge of increasingly expensive car-pool construction, but the benefits of these new lanes are surprisingly equivocal. The lanes are always additions to freeways (no previously existing lane has been converted for car-pool use since the Santa Monica diamond lane debacle of 1976, which set back car-pool lanes by a decade), so they always ease traffic for a while. But as Hawthorne points out, the phenomenon of “traffic generation” has been known for decades. More lanes just attract more drivers and more congestion.

What’s more, although it’s true that car-pool lanes carry more passengers than general purpose lanes, this is a meaningless statistic. If all of a freeway’s existing car-pools move into a newly constructed HOV lane, all you’ve done is juggle the traffic around. In fact, since HOV lanes generally have lower capacities than multiuse lanes (thanks to the “snail” effect, which is exactly what it sounds like), you actually lose some overall traffic capacity.

But here’s the worst news. What we really want to know is how many drivers are motivated by HOV lanes to form new car pools. Surprisingly, though, considering the thousands of miles of HOV lanes constructed in the United States over the past two decades, this is a hard number to get a handle on. There have been a few studies of new car-pool formation, however, and here’s one of them from Caltrans showing the number of car pools on LA freeways over the past 20 years: 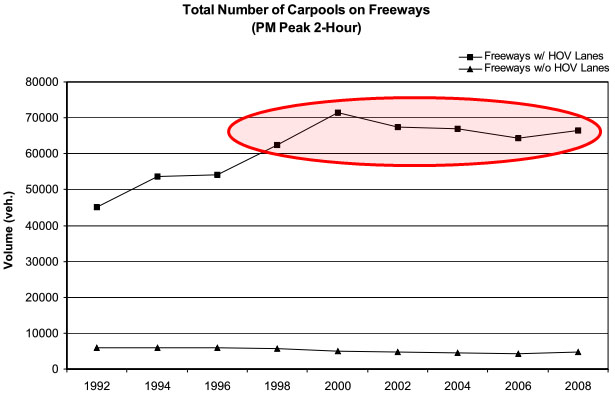 The good news is that HOV lane construction during the ’90s appears to have genuinely spurred more carpooling. True, adding 25,000 new car pools doesn’t seem like much for a region the size of the LA basin with hundreds of miles of freeways, but at least it’s measurable progress. The bad news is that despite the billions of dollars spent since then, new car-pool formation during the past decade has been…zero. All that money seems to have had no effect on car-pool behavior at all. Nor is this limited just to Los Angeles. Pravin Varaiya of the University of California’s PATH program came to the same conclusion for the Bay Area’s HOV lanes in a 2007 study. Over both the near and long term, the shorter commute times of HOV lanes apparently has almost no effect on the willingness of drivers to form car pools. What’s more, census data suggests this is a nationwide phenomenon. “Over time the attraction of HOV travel appears to be weakening,” Varaiya concludes.

None of this should be taken as a definitive takedown of car-pool lanes. The data on their effectiveness is murky, to say the least, and a lot depends on where the lanes are built and how well they support bus traffic. But that murkiness is surprising all by itself considering the HOV spree the country has been on over the past two decades. Even after 20 years of nonstop construction, we still don’t really know how effective HOV lanes are at promoting car pools.

For Angelenos, however, the news is almost certainly bad. For starters, the I-405 shutdown is going to produce two rounds of chaos (the second one coming at the end of the project). And the project is sucking up a billion dollars that could almost certainly be used more efficiently on other transit projects. But that’s the least of it. If Caltrans’ own chart is to be believed, LA’s willingness to carpool was saturated over a decade ago. Adding another billion dollars in new HOV lanes won’t produce even a single new car pool. Now that’s Carmageddon.

Plus even Hitler doesn’t like it. And he’s the guy who built the autobahns.