Let’s review Republican priorities, shall we? First off, here are three Republicans explaining why a bad economy is something to be concerned about. Hint: it’s not because of the human 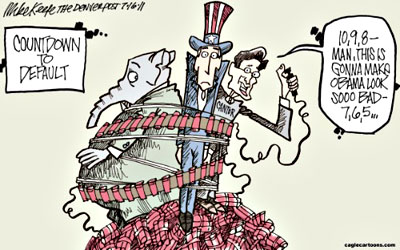 From conservative analyst Erick Erickson, explaining why Republicans should wreck the U.S. economy via default:

Obama has a legacy to worry about. Should the United States lose its bond rating, it will be called the “Obama Depression”. Congress does not get pinned with this stuff.

It destroys your brand and would give the president an opportunity to blame Republicans for a bad economy. Look, he owns the economy. He has been in office almost three years now. And we refuse to let him entice us in to co-ownership of a bad economy.

From James Pethokoukis, tweeting excitedly last night about the brighter side of bad economic news:

And here are a couple of other glimpses into what’s motivating Republicans these days. Hint: it’s all about protecting the rich.

From the LA Times, on the travails of the Consumer Financial Protection Bureau:

When it opens its doors next week, the federal government’s new agency to protect consumers from financial fraud won’t be quite the aggressive watchdog promised a year ago….The agency won’t have power, for instance, to crack down on mortgage brokers, some of which helped lead the nation into the housing debacle four years ago. It also won’t have authority over other largely unregulated sectors of the financial services industry, such as payday lenders and remittance companies such as Western Union, that it was created to police.

….Vehement opposition to the agency from Republicans and much of the financial services industry has stalled efforts by the Obama administration to install a director, a five-year appointment that must be confirmed by the Senate.

From James Stewart on who benefits from cutting funding to the SEC:

Cutting the S.E.C.’s budget will have no effect on the budget deficit, won’t save taxpayers a dime and could cost the Treasury millions in lost fees and penalties. That’s because the S.E.C. isn’t financed by tax revenue, but rather by fees levied on those it regulates, which include all the big securities firms.

A little-noticed provision in Dodd-Frank mandates that those fees can’t exceed the S.E.C.’s budget. So cutting its requested budget by $222.5 million saves Wall Street the same amount, and means regulated firms will pay $136 million less in fiscal 2012 than they did the previous year, the S.E.C. projects.