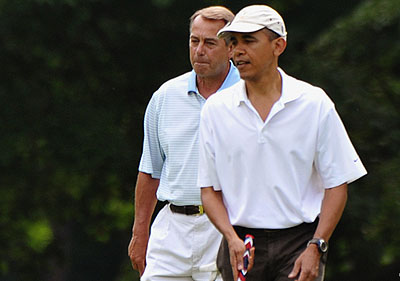 Every major newspaper is reporting tonight that Barack Obama has been holding secret post-golf meetings with John Boehner and is now pushing for a much larger budget deal than anyone has been talking about so far. Here’s the Washington Post:

At a meeting with top House and Senate leaders set for Thursday morning, Obama plans to argue that a rare consensus has emerged about the size and scope of the nation’s budget problems and that policymakers should seize the moment to take dramatic action.

As part of his pitch, Obama is proposing significant reductions in Medicare spending and for the first time is offering to tackle the rising cost of Social Security, according to people in both parties with knowledge of the proposal. The move marks a major shift for the White House and could present a direct challenge to Democratic lawmakers who have vowed to protect health and retirement benefits from the assault on government spending.

….Rather than roughly $2 trillion in savings, the White House is now seeking a plan that would slash more than $4 trillion from annual budget deficits over the next decade, stabilize borrowing, and defuse the biggest budgetary time bombs that are set to explode as the cost of health care rises and the nation’s population ages.

The Wall Street Journal reports that means testing of Medicare is one proposal on the table, while the New York Times reports that Boehner might agree to $1 trillion in revenue increases in return for the bigger deal, possibly including an end to the Bush tax cuts for the wealthy. A few comments:

A friend emails a question about all this: “Obama can survive 2012 without my vote and even with my working actively for his GOP opponent, which I will do if he does this, suicidal as it may be. But do you think he can survive, can the Democratic Party survive, if he actually does this?”

Answer: yes I do. This isn’t what I want, and it’s not what the progressive wing of the party wants. But the plain fact is that deficit cutting is pretty popular across the board, modest reductions in Social Security and Medicare will probably go over fine with independents, and anyway, liberals have nowhere else to go. A few might actually do what my friend threatens to do, but in the end it won’t be many — especially after the Republican Party settles on a candidate and we’ve all had a year or so to get to hate him (or her). And Obama will raise a fantastic amount of money from wealthy donors who are OK with this kind of dealmaking regardless of whether the progressive blogosphere is happy with him. Like it or not, the sad fact is that Obama doesn’t need us. We’re mostly going to vote for him regardless of what he does, and he’s going to get all the money and organization he needs without us. Lefties simply don’t have much leverage these days.

So not only can the Democratic Party survive if Obama does this, it will probably flourish, electorally speaking. That’s not a happy conclusion, but I think it’s likely an accurate one.

But needless to say (again), details matter. So before we get too hot under the collar in either direction, let’s wait and see what kind of deal Obama and Boehner really make.