Matt Yglesias points to a poll suggesting that President Obama won the debt ceiling debate in the public’s eye, but isn’t sure it matters:

As longtime readers know, I’m pretty much an economic determinist about election outcomes, and think public perception of Barack Obama’s negotiating strategy during the summer of 2011 are largely irrelevant to his political future. But it’s important to emphasize that approximately zero percent of elected officials and approximately zero percent of professional political operatives agree with this. In practice, politicians and their staff act as if every public relations battle has dramatic electoral consequences. 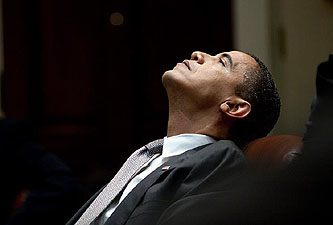 Under the circumstances, I think President Obama is largely driven by a desire to be perceived by the public as the more reasonable party and that he is succeeding in that effort.

I think this is one of those areas where you need to take political scienc-ey claims about elections with a grain of salt. Everyone agrees that the state of the economy has a big effect on presidential elections, but there are (at least) two big caveats. First, most models suggest that the economy accounts for perhaps two-thirds of the outcome. Obviously that’s a lot, but most elections are fairly close and the remaining third can pretty easily be decisive.1 Second, these models implicitly assume that both sides are spending lots of money and maneuvering for advantage and doing all the other things that presidential campaigns do. The net effect is small, but only because both sides are doing it. If you take a fatalistic approach and skip all this stuff, you’ll get eaten alive.

So this kind of maneuvering is probably more important than simple economic models suggest. Certainly Obama believes that. Every time I write about this stuff, Greg Sargent emails to remind me that we don’t really have to guess why Obama has acted the way he has. We already know. Here’s an Anne Kornblut piece from May in which Obama’s advisers say that, yes, the economy has to improve, but:

The advisers are deeply concerned about winning back political independents, who supported Obama two years ago by an eight-point margin but backed Republicans for the House this year by 19 points. To do so, they think he must forge partnerships with Republicans on key issues and make noticeable progress on his oft-repeated campaign pledge to change the ways of Washington.

Right or wrong, that’s what they believe. Like all Democratic presidents, who can depend on only a small progressive base, Obama believes he’ll win only if he attracts lots of support from independents. And the only way to do that is with deals like the one he just cut. It’s the kind of deal that appeals to independents and makes John Boehner and the Republican Party look extreme.

1That said, if the economy is bad enough then nothing else will matter — and right now it’s looking pretty bad. If we continue slumping our way into 2012, Obama is going to have a very tough time being reelected unless Republicans go completely crazy and nominate someone like Michele Bachmann.