Multiple media reports suggest that Libya’s rebels are close to victory over Muammar Qaddafi. This isn’t due solely to fighters from eastern Libya — who have been the focus of most of the combat until now — moving west and surrounding Tripoli, either. It’s apparently been largely due to an uprising within the city itself, something that Juan Cole is pleased about:

Those who were expecting a long, hard slog of fighters from the Western Mountain region and from Misrata toward the capital over-estimated dictator Muammar Qaddafi’s popularity in his own capital, and did not reckon with the severe shortages of ammunition and fuel afflicting his 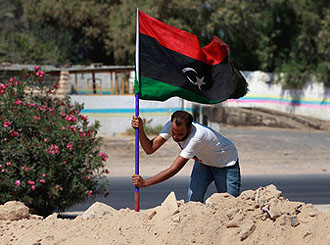 demoralized security forces, whether the regular army or mercenaries. Nor did they take into account the steady NATO attrition of his armor and other heavy weapons.

This development, with the capital creating its own nationalist mythos of revolutionary participation, is the very best thing that could have happened. Instead of being liberated (and somewhat subjected) from the outside by Berber or Cyrenaican revolutionaries [from central and eastern Libya], Tripoli enters the Second Republic with its own uprising to its name, as a full equal able to gain seats on the Transitional National Council once the Qaddafis and their henchmen are out of the way. There will be no East/West divide. My hopes for a government of national unity as the last phase of the revolution before parliamentary elections now seem more plausible than ever. Tellingly, Tunisia and Egypt both recognized the TNC as Libya’s legitimate government through the night, as the Tripoli uprising unfolded. Regional powers can see the new Libya being born.

With turmoil inside Tripoli, and a vaunted line of defense outside the city appearing to have done little to contain the rebel advance, the events suggested a possibly decisive shift in the six-month uprising against Colonel Qaddafi, which has already become by far the most violent of the Arab Spring uprisings.

….Of particular note on Sunday, the rebels seemed to meet little resistance from the 32nd Brigade, a unit NATO had considered one of the most elite in Libya, commanded by Khamis Qaddafi, one of Colonel Qaddafi’s sons. The so-called Khamis Brigade was one of the key forces enforcing the defense lines around the capital, extending about 17 miles outside Tripoli to the west and about 20 miles outside the capital city in the south.

I’ve been a skeptic of the Libyan operation from the start, but if this keeps up — and if the revolutionary government goes on to establish a decent regime — then it looks like President Obama’s judgment in this matter may indeed have been better than mine. At a modest cost in dollars, virtually no cost in coalition lives, and no requirement for postwar occupation or rebuilding, we’ve backstopped an indigenous uprising against a brutal dicatator who was on the verge of slaughtering thousands of his own people. Not bad.

There are still some big ifs here, but at the moment things look better than I imagined they would. Keep your fingers crossed.