A friend emails to say he’s sick and tired of Rick Perry and wants me to write a post about the first non-Perry item that comes up in my RSS feed. Fine. But who to choose? One potato, two potato, I haven’t linked to Modeled Behavior for a while, so let’s see what’s up there. Sadly, their top post right now is about Rick Perry. But the next post down is from Karl Smith:

I am short. My wife is short. Chances are my son will be short. Here’s a question – why?

At this point in human history, height in the Western world is mostly genetically determined. Yet, as far as I can tell the advantages to having tall genes outweigh those to having short.

Even in a preindustrial environment this seems to be true. This is likely why taller people, especially men are more attractive and have higher status.

So, why did genetic shortness persist?

Hmmm. What kind of ill-informed ev psych speculation can I offer up here? Maybe shortness isn’t especially maladaptive. Maybe the big, tall cavemen all went chasing after the saber-tooth tigers and got eaten while the short guys ran away to live another day. Or maybe the short guys, being less sexually attractive, 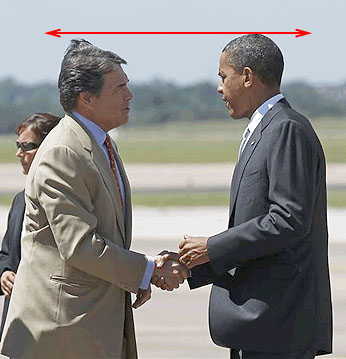 had to develop a better line of patter and became more socially adept? Or maybe agility and climbing ability are as important as speed and strength. Perhaps the little guys tended to stay at home and help with the farming instead of going out on hunts, thus providing lots of opportunities for afternoon quickies while Og was away? Or maybe shortness genes were all conserved via women, for whom it was an advantage?

Hell, I don’t know. So let’s get back to Rick Perry. Authoritative information on his height is surprisingly hard to come by, but in this picture he’s pretty close to standing up straight and looks to be about six feet tall or maybe a little under — but in any case clearly a bit shorter than Barack Obama. (Perry is also about six feet wide, but that doesn’t matter.) Since it’s widely known that the taller candidate usually wins in a presidential contest, this makes Perry a pretty chancy GOP opponent for Obama. Mitt Romney is 6′ 2″, which makes him a safer alpha male bet for Republicans. And pipsqueak Michele Bachmann is obviously doomed. So I’ll stick with Romney as the favorite to win the Republican nomination this year.