The level of crazy in last night’s debate was too high to really keep track of, but Paul Waldman points to this statement from Herman Cain about why he’d be dead if healthcare reform had been the law of the land back when he was diagnosed with cancer:

If we had been under Obamacare and a bureaucrat was trying to tell me when I could get that CAT scan that would have delayed my treatment. My surgeons and doctors have told me that because 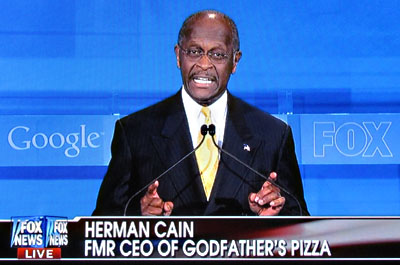 I was able get the treatment as fast as I could, based upon my timetable and not the government’s timetable that’s what saved my life.

I have no doubt that the typical Republican voter actually believes that when the Affordable Care Act is implemented, every time one of the nation’s nearly one million practicing physicians wants to perform a procedure or prescribe a medicine, they’ll have to literally place a call to Washington and get permission from some stingy bureaucrat….Why do they believe that? Because people like Herman Cain keep telling them so. I don’t know whether Cain is an ignoramus or a liar, but it has to be at least one, maybe both. He stood on a stage, looked into the camera, and told people that under the ACA, doctors will have to get permission from government bureaucrats for every procedure, and treatment of illnesses will proceed not according to the recommendations of medical professionals but on “the government’s timetable.”

Not to put too fine a point on it, but this is a real problem for liberals. Sure, we cherry-pick evidence, we spin world events, and we impose our worldview when we talk about policy. Everyone does that. But generally speaking, our opinion leaders don’t go on national TV, look straight into the camera, and just outright lie about stuff. Theirs do. And you know, if you’d been told over and over that Obamacare meant getting government permission every time you want to go to the doctor; if you’d been told over and over that the economy is in bad shape because a tidal wave of regulations are strangling American business; and if you’d been told over and over that stimulus spending didn’t create one single job — well, what would you think about Barack Obama’s presidency? Not much, I imagine.

It’s awfully hard to fight stuff this brazen. Everyone understands that politicians fudge details and engage in partisan hypocrisy. All part of the game. But most of us don’t expect them to flat out lie. So when they do, we figure there must be something to it. It’s a pretty powerful formula, especially when the mainstream press no longer seriously polices this stuff, and isn’t much believed even when it does. The answer remains frustratingly elusive.