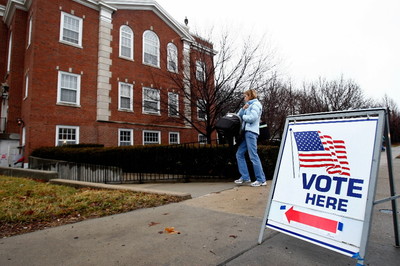 I almost forgot about this, but Ari Berman has a terrific piece in Rolling Stone this week about one of my pet topics: the relentless Republican drive to pass laws designed to reduce voting rates among traditional Democratic constituencies:

All told, a dozen states have approved new obstacles to voting. Kansas and Alabama now require would-be voters to provide proof of citizenship before registering. Florida and Texas made it harder for groups like the League of Women Voters to register new voters. Maine repealed Election Day voter registration, which had been on the books since 1973. Five states — Florida, Georgia, Ohio, Tennessee and West Virginia — cut short their early voting periods.

Florida and Iowa barred all ex-felons from the polls, disenfranchising thousands of previously eligible voters. And six states controlled by Republican governors and legislatures — Alabama, Kansas, South Carolina, Tennessee, Texas and Wisconsin — will require voters to produce a government-issued ID before casting ballots. More than 10 percent of U.S. citizens lack such identification, and the numbers are even higher among constituencies that traditionally lean Democratic — including 18 percent of young voters and 25 percent of African-Americans.

After the recount debacle in Florida in 2000, allowing voters to cast their ballots early emerged as a popular bipartisan reform. Early voting not only meant shorter lines on Election Day, it has helped boost turnout in a number of states — the true measure of a successful democracy. “I think it’s great,” Jeb Bush said in 2004….But Republican support for early voting vanished after Obama utilized it as a key part of his strategy in 2008.

….That may explain why both Florida and Ohio — which now have conservative Republican governors — have dramatically curtailed early voting for 2012. Next year, early voting will be cut from 14 to eight days in Florida and from 35 to 11 days in Ohio, with limited hours on weekends. In addition, both states banned voting on the Sunday before the election — a day when black churches historically mobilize their constituents.

If this weren’t so loathsome, you’d almost have to admire it. I mean, would it ever even occur to you to specifically ban voting on the Sunday before election? It wouldn’t to me. But that’s because I don’t have quite the reptilian mind it takes to figure out that this might affect black churches disproportionately compared to white churches, and therefore provide a small advantage for Republicans.

But Republican strategy gurus have exactly that kind of mind. Thus we get laws like this one, plus many, many more designed for exactly the same purpose. Berman runs them all down for you, so read his whole piece. This is revolting far beyond anything we should accept as normal politics, and it’s a disgrace that the Supreme Court allows it to continue.