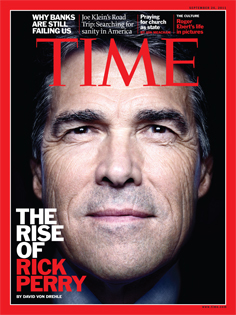 Time magazine has an interview with Rick Perry this week. Is this his first real interview since announcing his candidacy? I’m not sure, but it’s the first one I’ve seen. Here’s one tidbit:

What should happen next in Afghanistan?

I think we need to try to move our men and women home as soon as we can. Not just in Afghanistan, but in Iraq as well….Our overall objective has to be to […] drive out those who would do harm to our country. I think we’ve done that in Iraq and Afghanistan. We have substantial ways to continue to put the pressure on the bad guys, if you will, and I don’t think keeping a large force of United States uniform military in Afghanistan for a long period of time is particularly in the interest of the U.S., or for that matter, in Afghani interest.

That’s….interesting. Definitely not something from the neocon wing of Republican thinking. But Perry is certainly attuned to the tea party id, and I’d take this a sign that even there people have mostly lost interest in Afghanistan and Iraq as “central fronts in the war on terror.” The fact that Perry is implicitly endorsing Obama’s strategy in both places strikes me as pretty meaningful.

But in case you’re thinking that maybe this means Perry is surprisingly informed and flexible on foreign affairs, there’s also this:

Beside the Bible or other religious texts, which book has influenced you most over the last decade?

I don’t know about influencing me the most — I’m reading a couple of books on China right now that are most interesting. After a trip to Beijing and Shanghai and Taiwan, I realized how important that region of the world is to America and to the world. So Kissinger’s book on China, I’m wading through it, and I’m reading another book by Aaron Friedberg [A Contest for Supremacy] that is a really fine read about China, their very long view of the world and our need to really pay attention to what’s going on in that part of the world.

There’s also some stuff about Social Security, of course. Perry once again congratulates himself for bravely bringing up a subject that, in fact, has been discussed to death for decades, and once again declines to offer any actual proposals. “The idea that we’re going to write a Social Security reform plan today is a bit of a stretch from my perspective.” I can’t imagine why, since you could probably paper over the Capitol dome with Social Security plans, but that’s his stand and he’s sticking to it. It’s terrible, it’s broken, it demands immediate attention, and……one of these days he’ll give it some serious thought. Urk again.