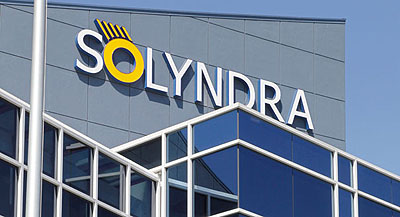 Were Department of Energy loans to green companies like Solyndra just an example of Democratic pork in the stimulus bill? Matt Steinglass says no:

This is not a good description of what happened with Solyndra. In fact, it’s sort of backwards. There were elements of the ARRA that did not make for optimal stimulus, and were included largely for political reasons. But those elements weren’t the DOE innovative-technology loan guarantee programme, or for that matter the kinds of government spending generally desired by liberal Democrats. They were the kinds of tax breaks for wealthy people and businesses generally desired by conservative Republicans. The DOE loan guarantees were in fact among the programmes that the Congressional Budget Office believed would provide the maximum possible stimulus….There’s no mystery as to why Democrats wanted the DOE loan guarantees in the ARRA. These were “shovel-ready” projects; the corporations involved were ready to spend the money quickly.

But was there pressure to speed up the loan process? Indeed yes:

Why? Probably because in early 2009, DOE was widely viewed as a lazy, sluggish organisation, poor at managing money, that was making ridiculous bureaucratic demands on firms before it would approve the loan guarantees, which had been authorised by Congress in 2005 and launched by the Bush administration in 2007….Newly minted energy secretary Steven Chu was labouring mightily to push through the backlog of loan guarantees, telling slowpoke employees: “Tell us what you need to do in order to get them [decided] in four weeks.”

….Unfortunately, when the government subsidises investment in an industry, some of the investments will fail; speeding up the process may increase the risk of failure. There are trade-offs here. Rather than loan guarantees, the government could subsidise the industry directly with grants. Then instead of a risk that taxpayers will have to pay, you have a certainty; you may also run afoul of WTO rules. Or the government could restrict its loan guarantees to companies that are already profitable. But then you’re just sponsoring lazy national-champion firms, not seeding dynamic startups. Or the government could limit stimulus efforts to buying public end-products (more trains, roads, parks, museums, schools, fighter jets, public housing, etc) and let the private sector compete to supply them. But that’s probably not shovel-ready and may not work as stimulus.

That last paragraph is an important one. If you’ve decided, for partisan political reasons, that stimulus just flatly doesn’t work, then you’re free to make whatever outrageous charges you want. You can complain that the program is moving too slowly (see the Washington Post today for that version) and then turn right around and complain that it’s moving too fast. You can complain that it’s Democratic pork and then turn around and insist on diverting the money to nuclear and fossil fuel loan guarantees. You can make up nonsensical numbers about the cost of jobs created, as if that’s all the loan money is for, and your adoring fan base will cheer. You can insist that federal programs don’t create any jobs and then turn around and brag about all the jobs that some new bridge-building project has brought into your district. You can basically say anything you want.

If you’re on the other side, you’re a little more bound by reality. And the reality is that some projects succeed and some fail. You can have more successes (maybe) by being more careful, or you can streamline the program, but at the cost of accepting more failures. If you actually decide to do something, instead of standing on the sidelines and carping, those are the risks you take. Obama and congressional Democrats took that risk in 2009, and the result saved millions of jobs and kept us from sliding into a major depression. But failures are inevitable no matter how well the programs are run, and opportunistic politicians are always going to try to take advantage of that. It comes with the territory. That’s what’s happening here.