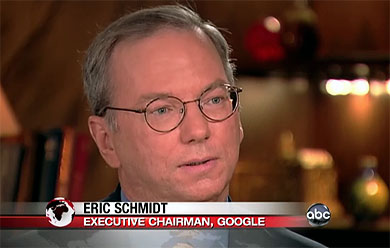 AMANPOUR: But what about the very real problem, and that is many businesses seeing, precisely because of the efficiency of, let’s say, online, and the new sort of technology, that it is much cheaper to buy a machine to do a job — you don’t have to train it, you don’t have to pay it wages — rather than hire a person. I mean, this seems to be the structural reality of the economy now.

SCHMIDT: That’s been true for a hundred years. It’s been true of the industrial era for literally the last century. And over and over again, American ingenuity has meant that people who were displaced were able to find new jobs in these new industries. People who did something manually learned how to operate the machine.

The smart money says that Schmidt is right. People have been complaining since the start of the Industrial Revolution that machines would make people obsolete, and they’ve been wrong ever since.

And yet…..Schmidt phrases this correctly: “People who did something manually learned how to operate the machine.” As long as machines increased productivity enough, they created as many jobs as they destroyed even if it took a tenth the number of people to tend the machines as it did to do the same job by hand. Individuals might lose their jobs, and entire sectors might die, but the economy as a whole would employ as many people as it did before. Requiring one-tenth the labor is fine as long as GDP has grown 10x: Everyone’s still employed, and even better, everyone is sharing in the output of a much bigger economy.

But that’s starting to change. Now we’re starting to build machines to tend the machines. That is, we’re not building machines to take over physical labor, we’re building machines to take over mental labor. And it’s a lot less clear what that does to economy-wide employment. Even if you assume that these machines are more efficient than humans and boost overall productivity, what are the jobs that humans get transferred to? If machines are doing the physical work and machines are doing the supervisory work, all that leaves is jobs for people tending the machines that tend the machines. But once you go two levels deep like that, the economy would have to grow astronomically to keep everyone employed. One hundredth the amount of labor is fine as long as GDP grows 100x, but that’s not going to happen. Energy constraints alone will prevent it, at least in the medium term.

We’ve only barely begun to see the thin edge of this particular wedge so far. But that’s because machines still aren’t very smart and can only take over supervision of the most routine jobs. Even at that, though, I suspect it’s had a small effect on a certain segment of the labor force already. Not the very bottom, which is mostly pure labor and has already been decimated about as much as it’s going to be. And not at the middle and top levels, where computers are still years away from being able to take over anyone’s job. But what about the segment right in between, where the physical labor is minor and the mental labor isn’t much more? That stuff can go away and never come back.

To take an example from the near future, what happens when Google finally builds a safe, reliable robotic car? Truck drivers are all put out of business, that’s what. And if we can build a computer smart enough to drive a truck, we can build a computer smart enough to do just about anything else that your average truck driver can do. There’s just nowhere to go. In science fiction novels, this gives us all time to corral our inner muses and produce endless entertainments and amusements for each other, but that’s not going to happen in real life. Most of the people who lose their jobs because their cognitive skills are inferior to a machine aren’t going to suddenly start creating great art. Or even mediocre art.

I’m just musing out loud here, not pretending to have thought deeply about all this. And none of this is anything close to new. But I still wonder just how soon we’re going to have to face up to it. Sooner than we think, I suspect.