David Leonhardt writes today that if we expect the economy to eventually rebound the way it did after the Great Depression of the 1930s, we’re sorely mistaken. There’s obviously something to this: after World War II, which finally ended the Depression for good, the United States had (a) a huge pool of savings that people were eager to put to use, and (b) a strong potential export economy since the rest of the world had been blown to smithereens. We didn’t need to import goods from Japan or China, and we didn’t need to import oil from OPEC. We had all we needed right here at home.

Today, even after we crawl out of our current malaise, things will be just the opposite. Our debt overhang will probably be a drag on growth for a long time to come, our trade balance is persistently negative, and the price of oil acts as a significant 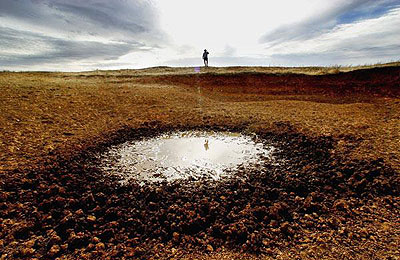 constraint on economic growth. So some pessimism is warranted. But I’m not so sure about this:

Three giant industries — finance, health care and housing — now include large amounts of unproductive capacity. Housing may have shrunk, but it is still a bigger, more subsidized sector in this country than in many others. Health care is far larger, with the United States spending at least 50 percent more per person on medical care than any other country, without getting vastly better results….The contrast suggests that a significant portion of medical spending is wasted, be it on approaches that do not make people healthier or on insurance-company bureaucracy.

In finance, trading volumes have boomed in recent decades, yet it is unclear how much all the activity has lifted living standards….Wall Street has captured a growing share of the world’s economic pie — thereby increasing inequality — without doing much to expand the pie. It may even have shrunk the pie, given that a new International Monetary Fund analysis found that higher inequality leads to slower economic growth.

The common question with these industries is whether they are using resources that could do more economic good elsewhere. “The health care problem is very similar to the finance problem,” says Lawrence F. Katz, a Harvard economist, “in that incredibly talented people are wasting their talent on something that is essentially a zero-sum game.”

I’d treat these three things separately. Housing is a purely short-term issue. There’s really no reason to think that it will act as a permanent drag on the economy. Sometime in the next few years it will return to its trend rate of growth and that will be that.

Healthcare is different. There’s unquestionably some waste, both in human and economic terms, and this really is a misallocation of resources. At the same time, the big reason we pay more for healthcare than other countries is simply because we pay doctors more, we pay hospitals more, we pay insurance companies more, and we pay pharmaceutical companies more. I happen to think this is a bad thing, but it’s not as if the money falls through a sieve and disappears. It all stays in the economy and gets spent one way or another.

And then there’s high finance, which as near as I can tell, really has turned into a huge leech on the economy. If I had to guess, I’d say that upwards of a quarter of all financial activity today is actively damaging to the economy, and reforms like Dodd-Frank will have only the slightest impact on that.

So what’s my beef with Leonhardt? Just that I think he’s overstating things a little bit? No. My beef is with the bolded sentence above. The problem is that there’s very little evidence that housing and healthcare and finance are actively sucking away investment dollars that could be better used elsewhere. Rather, the problem seems to be a drought of good investment opportunities, which leaves lots of money idle and looking for something else to do. The result is the same — lots of money going into unproductive sectors — but the arrow of causality is different. If there were lots of great, high-yield investment opportunities in the real world of consumer goods and services, money would flow there instead of blowing up housing bubbles and enriching a bunch of testosterone-fueled Wall Street traders.

A couple of days ago I argued that our capacity for innovation might be healthier than it’s often given credit for. But if there’s a strong counterargument, I think this is at the core of it. If we really are innovating at the same pace as in the past, why are the world’s investment dollars flowing so heavily into useless crap instead? It might be, as I sort of argued on Friday, that present-day innovations are as great as they’ve ever been, but simply don’t cost very much and don’t employ very many people. Maybe. But in any case, the great investment drought of the past decade is, I think, at the core of everything. One way or another, we need to figure out why it happened and why it seems to be persisting.