Guess what? Rick Perry’s energy-centric “jobs” plan turns out to be — surprise! — pretty much a joke. (A joke mostly stolen from the American Petroleum Instititute, but a joke nonetheless.) Aside from the usual heroic assumptions you’d expect in a campaign white paper, Perry basically pretends that President Obama plans to halt a bunch of stuff — natural gas fracking, pipelines to Canada, etc. — and then counts as new any job that results from not halting this stuff that, in reality, Obama has no plans to halt in the first place. And even at that, he only comes up with something like 100,000 new jobs per year. More likely, says Michael Levi, Perry’s plan would produce, at most, about 50,000 new jobs per year.

Does this mean that Perry is unserious? Jonathan Bernstein says no: Perry is just reacting rationally to the environment he finds himself in:

Perry is confronted with a tough problem, and is taking a sensible way out. The tough problem is that doing policy in the GOP nomination contest is almost impossible. What motivates Tea Partiers and other enthusiastic primary voters? A lot of it is mythical, such as the imminent Obama crackdown on fracking seen here, or Obama’s apology tour, or Obama’s plans to seize everyone’s guns, or all those IRS agents that Jon Huntsman was complaining about in last week’s debate.

Others are internally contradictory; good luck proposing a budget that eliminates the deficit, cuts taxes, and doesn’t cut spending on the military or current Medicare or SS payments. Still others are massively unpopular general election positions; that part is normal in all presidential nomination contests, but particularly an issue this time around. And hanging over all of it is the possibility that something on the approved list today could be the mark of a RINO tomorrow (see: Mitt Romney, health care reform). Not to mention that there are a half dozen or so “candidates” who are prone to making up stuff intended to ingratiate themselves to the crazies (well, it’s really mainly three — Newt, Bachmann, Cain).

In that environment, calling for a tough stand against the mythical is an obvious and probably smart choice. Thus Mitt Romney’s foreign policy, which appears to be entirely designed against opposition to 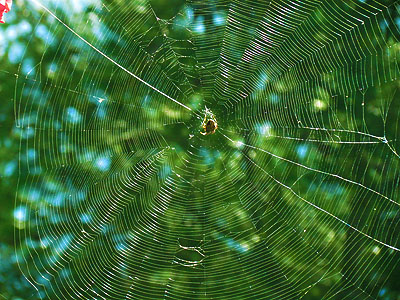 mythical apologies, not to mention everyone’s opposition to the mythical “Obamacare” version of ACA. And thus Rick Perry’s energy plan.

There are only so many ways to say that the modern Republican Party is crazy. Plus it’s depressing to think too hard about this. So I often find myself trawling around the internet looking for the interesting and humorous ways that other people are saying this. Jonathan wins today’s prize for his Kinsley-esque explanation of why Rick Perry isn’t a nitwit so much as he’s merely caught up in the spiderweb of crazy that is today’s GOP.

To illustrate this, here’s a picture of the spiderweb outside my window. Does this seem like a stretch? Of course it is, but I’ve already given you pictures of the ducks, turtles, squirrels, mice, roses, birds, and, of course, cats that have inhabited my backyard from time to time. And I’m not going to stop until I’ve shown you everything. (The possum in our garage a couple of weeks ago scurried away too fast to get a picture. But next time I’ll be ready.) So today you get a spiderweb. Next week, perhaps I’ll be reduced to taking a picture of a grasshopper or something, and trying to make some kind of political parable out of it. But that’s next week’s problem.

UPDATE: I originally quoted Levi suggesting that Perry’s plan would create about 25,000 jobs per year. However, via Twitter, he says the jobs are front loaded, so 50,000 is probably a better estimate for the first few years. I’ve corrected the text.