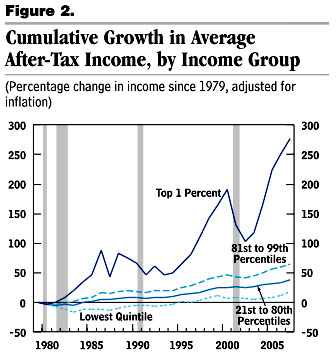 The Congressional Budget Office is out with a timely new report on income inequality, which you can find here. Nickel version: The rich are getting richer, and the rest of us are just kind of drifting along.

The main summary chart is the one on the right. Since 1979, adjusted for inflation, incomes of the broad middle class (solid blue line labeled “21st to 80th percentiles”) have increased about 40 percent, which comes to a sluggish 1 percent per year. During the same period, the incomes of the richest 1 percent have increased about 280 percent, or 7 percent per year. This is a pretty familiar chart by now, but one thing to note is that the incomes of the rich are pretty volatile: They drop a lot during recessions, but they also bounce back pretty quickly and regain their high growth rates as soon as the recession is over. This chart only goes through 2007, but the same dynamic has been at work in the aftermath of the Great Recession: a steep drop followed by an equally steep recovery.

Another set of charts is below. These are a little less familiar and need a bit of explanation. They show Gini inequality coefficients for different kinds of incomes, and the more distorted the chart the higher the inequality.

The other two charts show business income and capital income, and they’re quite different. Both show a fairly heavy amount of inequality, and, more interestingly, they show that the level of inequality has widened dramatically over the past three decades. Business income, which means income going to owners of private businesses, has grown much more concentrated, probably due to the growth of high incomes among privately owned professional firms (law, medicine, and finance). And capital income, which is largely dividends and rental income, has become far more concentrated as well. I’m not quite sure what story this tells, but one thing it tells us for sure is that most of the growth in income since 1979 has been in nonlabor income. Which is to say, not the kind of income that people like you and I get much of. 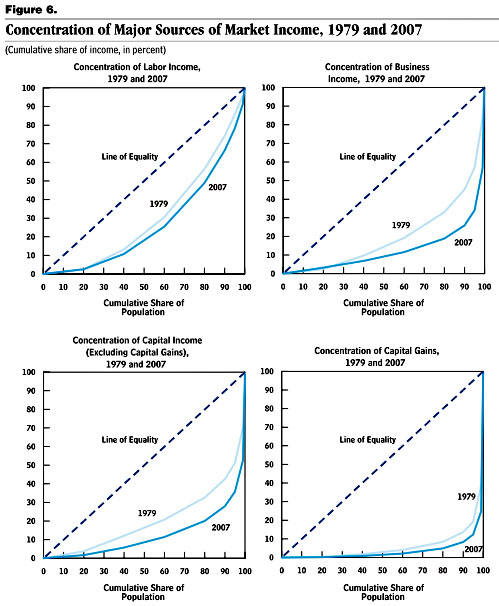