A couple of days ago I was watching yet another McDonald’s ad for their McRib sandwich and found myself wondering why. Not “Why am I watching this?” or even “Why would a loving God allow the McRib to exist?” I was wondering why, given its apparent popularity, McDonald’s only offers it for sale periodically. Why not make it a regular product?

But the truth is that I don’t really care very much, so I didn’t even go so far as to Google the subject. I figured there was probably some weird but prosaic marketing reason and then returned to whatever I was doing before.

But it turns out that, in fact, this really is a mystery. Apparently it’s not just a simple matter of asking McDonald’s and getting an answer. They’re not fessing up, apparently. But Willy Staley has a theory, encapsulated in this chart: 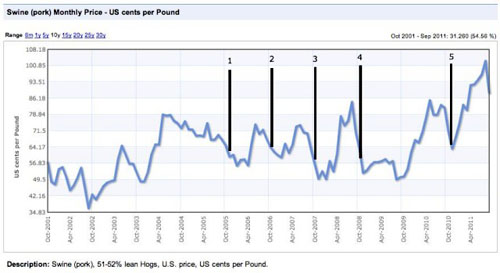 Basically, Staley thinks that McDonald’s sells the McRib only when pork prices are low:

The theory that the McRib’s elusiveness is a direct result of the vagaries of the cash price for hog meat in the States is simple: in this thinking, the product is only introduced when pork prices are low enough to ensure McDonald’s can turn a profit on the product. The theory is especially convincing given the McRib’s status as the only non-breakfast fast food pork item: why wouldn’t there be a pork sandwich in every chain, if it were profitable?

….Now, take a look at this sloppy chart I’ve taken the liberty of making. The blue line is the price of hogs in America over the last decade, and the black lines represent approximate times when McDonald’s has reintroduced the McRib, nationwide or taken it on an almost-nationwide “Farewell Tour” (McD’s has been promising to get rid of the product for years now).

….Looking further back into pork price history, we can see some interesting trends that corroborate with some McRib history…..

Much more at the link, including some self-criticism of this theory. For what it’s worth “Counter Theory 3” is the one that I always vaguely assumed was the explanation, but now I’m not so sure. Maybe it really is just economics red in tooth and claw.