Interest rates in the United States are really, really low. This suggests two things. First, it’s a great time for Uncle Sam to borrow money for free and spend it on things like infrastructure repair. Second, no matter 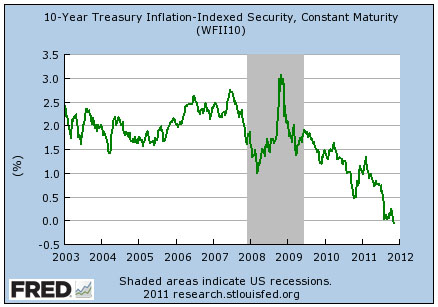 what the budget jihadists says, the financial markets are apparently not very worried about the federal deficit. If they were, they’d be driving interest rates up.

Tyler Cowen, though, thinks we shouldn’t be quite so sure of ourselves:

The “pretense of knowledge” I have seen in these discussions is staggering. Roubini forecast the Italian crisis in 2006 (bravo to him), but overall how many people on the left were so wise to be calling for such Italian spending cuts in 2005, when the country had relatively low bond yields?….The correct response to the Italian situation is: “We didn’t think it could get so bad so quickly. We will take this as a sobering lesson more generally.”

That is not the response I have been seeing. There is too much at stake for us to take comfort in our own supposed abilities to foresee the future.

I don’t think the Italian situation is as clear cut as Tyler makes it out to be. Italy’s budget deficit wasn’t all that outrageous before 2005, and after that the EU put a lot of pressure on them to get it down. So it was hardly something that was ignored. Still, his overall point is worthwhile: Italy’s bigger problem was that although its absolute debt level was high, its debt-to-GDP ratio was declining thanks to low eurozone interest rates. That took some of the pressure off, but it turned out to be a fool’s paradise. Low interest rates don’t necessarily stay low forever.

This is one reason not to take too much solace in low U.S. interest rates right now: just as markets can be wrong during asset bubbles, markets can be wrong on sovereign borrowing rates too. And as we all know, if and when they finally decide they’ve been wrong, they can change course in a blink.

There’s a second reason too: our current borrowing rates are low not so much because markets think we’re in terrific shape, but because they think we’re the least worst option available right now. Unlike developing countries with roaring economies, U.S. bonds are stable and have modest inflation risk. And unlike eurozone bonds, they have no risk of default. So they’re the only game in town.

But they might not be forever. I think the evidence strongly favors substantial fiscal stimulus right now, but if there’s an argument for caution I think this is the best one. Markets can turn in a flash, and you don’t always have a lot of warning when it happens. As always, then, our best bet would be higher deficits now combined with a credible plan to cut deficits in the long term. Unfortunately, there’s simply no way to make the deficit math work without a substantial contribution from higher taxes. And the Republican Party flatly refuses to recognize that. It probably won’t happen soon, but eventually the markets are going to react fairly badly to this state of affairs.