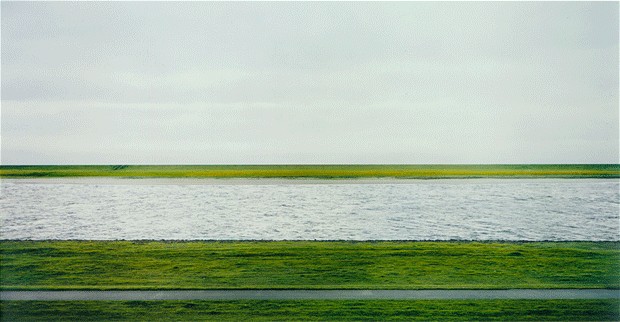 There’s been much talk recently about the record-shattering $4.3 million paid on Thursday for Andreas Gursky’s photograph Rhein II. Via Ezra Klein, Florence Waters takes a crack at explaining why it was worth it:

It could be a long time before a photograph comes along that will top Gursky’s print. This image is a vibrant, beautiful and memorable — I should say unforgettable — contemporary twist on Germany’s famed genre and favourite theme: the romantic landscape, and man’s relationship with nature.

But it is more than that. For all its apparent simplicity, the photograph is a statement of dedication to its craft. The late 1980s, when Gursky shot to attention, was a time when photography was first entering gallery spaces, and photographs were taking their place alongside paintings. Photography “as art”, at the time, was still brave and new, and the simplicity of this image shows a great deal of confidence in its effectiveness and potential for creating atmospheric, hyper-real scenarios that in turn teach us to see — and read — the world around us anew. The scale, attention to colour and form of his photography can be read as a deliberate challenge to painting’s status as a higher art form. On top of that, Gursky’s images are extraordinary technical accomplishments, which take months to set up in advance, and require a lot of digital doctoring to get just right.

Well, OK. This is the kind of art-speak that drives me crazy, but I simply don’t have an eye for art or enough background to allow me to make a judgment. So I’ll just keep my trap shut on the merits of the thing.

But I do have another question. If this photograph was bought purely because the buyer thinks it will rise in value, then fine. Maybe it will. But if it was purchased because, as Waters says, it was groundbreaking enough to be worth $4.3 million, I have to wonder if any piece of artwork so contemporary can legitimately be considered so groundbreaking. Rhein II was created in 1999, which makes it barely a decade old. Plenty of other artwork that new or newer has sold for as much or more. But should it? Isn’t there still some merit in allowing a bit of time to pass before we declare pieces of art so exceptional?

I guess that’s antediluvian thinking. After all, if Gursky is today’s Jackson Pollock, then there’s no time to waste. Waiting even 20 or 30 years would mean missing out on the next Jackson Pollock. Hell, waiting two or three years might be long enough. And yet, something about this still seems out of kilter. Any comments from art lovers?