In a sense, the problem with Greece has never really been about Greece. A Greek collapse, even a total one, would be bad news for Europe but it would be manageable bad news. Greece is 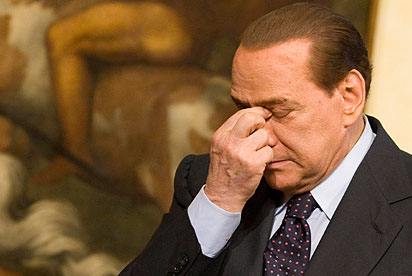 small enough that the EU could bail them out completely they had to.

(Whether they’d want to is another question entirely. But they could afford to if push came to shove.)

The bigger problem is that problems in one wobbly country make investors freshly nervous about Europe’s other wobbly countries too, and last week’s psychodrama in Athens has made them very nervous indeed. In particular, it’s made them nervous about Italy, which has tons of debt and a clownish prime minister who makes Herman Cain look like a statesman. As a result, nobody wants to buy Italian bonds, which means that Italy has to offer higher and higher interest rates to attract buyers. But higher interest rates make it even harder for Italy to ever pay off its debt, which makes investors even more nervous about getting repaid, which sends interest rates even higher, etc. etc. This eventually leads to collapse, and Italy is big enough that the EU can’t easily bail them out even if they want to.

But wait! There’s more. The Wall Street Journal explains what happens when Italian bond rates go up and the spread between Italian rates and German rates widens:

In some ways, the widening of that spread has caused a vicious selling cycle thanks to rules that govern the use of government debt as collateral for borrowing money, otherwise known as repurchase, or repo, agreements.

Analysts point to the rules set by LCH.Clearnet Group Ltd., the main clearinghouse for repurchase agreements. LCH.Clearnet requires higher collateral for repo trades involving government bonds that yield 4.5% more than a basket of triple-A-rated European sovereign bonds for five consecutive days. Market watchers said Italy is on the cusp of falling into that riskier bucket….Should the collateral requirements be triggered, it would make Italian debt less attractive for banks and investors who use their holdings as a cheap way to borrow money. Some market watchers said there has been selling of Italian debt in anticipation of the stricter guidelines.

This is sort of a special case of the more general vicious cycle described above. Basically, it’s like a run on the bank, and it’s the same dynamic that brought down Bear Stearns and Lehman Brothers. The vicious cycle in cases like this tends to accelerate toward the end, which is why Bear and Lehman collapsed within a week once their weakness became apparent. Sovereign countries are a little better off in this regard, but not a lot. If investors become convinced that Italian bond yields are going to continue widening, it becomes, first, a self-fulfilling prophecy, and then a full-scale panic. Last week was all about Greece. This week might be all about Italy.