From Amy Orr in the Wall Street Journal:

Much has been made about hedge funds’ failure to keep up with the major stock market benchmarks this year.

Wait. Haven’t I heard this story before? Oh right:

But 2011 is merely the latest disappointment in a string of misses that stretches back nine years, according to one analysis of the hedge fund industry.

Money invested in hedge funds since 2003 would have generated a return of 18% through November, according to data compiled by Hedge Fund Research. That puts it far behind the Standard & Poor’s 500-stock index, which has generated returns of 29% over that same period, once dividends are factored in, according to Simon Lack of SL Advisors. The hedge fund underperformance is even starker when placed next to a small basket of investment grade corporate bonds, as measured 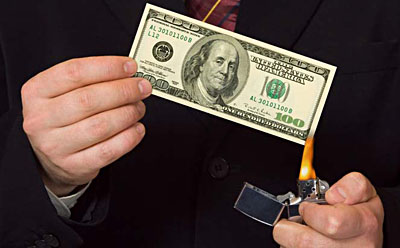 by the Dow Jones Corporate Bond Index. That benchmark has gained 77% since 2003. Factor in hedge fund managers’ customary 2% management fee and a 20% cut in profits, and the gap widens even more.

….For those who really want to invest with hedge funds, his advice is simple: Ask managers to cut fees. “Fees are at least twice as high as they should be,” Mr. Lack said. “If they all just cut fees by 50%, the world will keep turning but it will give investors a fairer share of profits.”

Measuring hedge fund performance is tricky, since most of them don’t just report their performance in nicely printed four-color reports the way regulated mutual funds do. And obviously there are some hedge funds that have consistently delivered outsized returns.

But most of them don’t, as a steady stream of research reports has made obvious for years. And yet, rich people with lots of money have continued to eagerly shovel their money into these funds, most of which have mediocre returns and all of which have astronomical management fees.

Why? Obviously it’s a great racket for hedge fund managers, who get paid enormous fees and benefit from the carried interest loophole, which allows them to pay taxes on their earnings at low capital gains rates even though they’ve invested no money of their own and their fees are “capital gains” only because a benevolent Congress has deemed it so. Conversely, for hedge fund customers, the whole enterprise seems to be little more than a fancy way to feel sophisticated and plugged-in while lighting their money on fire.

The whole thing is just a gigantic mystery. Either (a) hedge funds actually do better than outside researchers think, or (b) rich investors are really, really stupid. Is there an option C?