Why are Republicans so thrilled with Newt Gingrich? The obvious answer, of course, is that they aren’t. They just don’t like Mitt Romney much, and after speed-dating Donald Trump, Michele Bachmann, Rick Perry, and Herman Cain and finding them all wanting, Gingrich is all that’s left.

But that’s an uninteresting answer. There must be something about Gingrich, after all, something more than just being the last guy standing. But what? Once again, there’s an obvious answer: Whatever his faults, Gingrich has a vast reservoir of goodwill among movement conservatives for ushering in the Republican Revolution of 1994 and toppling 50 years of Democratic dominance of Congress.

Okay, fine. But what else? That was two decades ago. There has to be something about Gingrich himself, something about his personality or his temperament right now today that conservatives 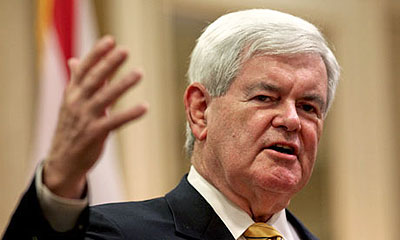 find appealing. So what is it? Paul Waldman picks up on the same trait that I think is probably Gingrich’s key strength:

Many conservatives are positively obsessed with the idea that contrary to all appearances, Barack Obama is kind of a dolt. There’s lots of talk about how Obama only got into Columbia and Harvard Law School because of affirmative action (you may remember noted highbrow intellectual Donald Trump making this claim), and endless jokes about Obama overusing teleprompters, with the idea that he’s too dumb to give an extemporaneous speech sometimes implied and sometimes stated outright.

So many conservatives have a fantasy that if they nominate their own smart guy, he’ll show the world that they’ve been right all along, that Obama is really a numbskull whom people only believe is smart because the liberal media sing his praises.

A week ago one of Andrew Sullivan’s readers provided the sound bite version of this theory:

As much as the commentariat likes to talk about electability, the just-regular-folks I spent the holidays with talked only about how Newt would “hammer” the President during debates. “Can you imagine,” my sister said, her eyes as lit-up as a child’s on Christmas morning. “When Obama starts that smartest-guy-in-the-room shit, Newt’ll shut him up.” No one talked about policy or even politics. This is a mob storming the Bastille, cheering the guillotine, and Gingrich is their most likely Robespierre.

In this view of things, Bachmann and Perry and Cain are the girls you want to have a fling with, but Gingrich is the girl you want to marry. No matter how many dumb teleprompter jokes they make—and this has been a staggeringly hardy laugh line among the right-wing for the past two years—in reality conservatives are intimidated by Obama’s obvious intelligence. Deep in their hearts, they really don’t want to nominate a moron like Perry or a clown like Cain or a kook like Bachmann because they’re afraid Obama will tear them apart.

But Newt! He’s the perfect candidate. He’s (a) not Romney, (b) a sharp debater, and (c) has a very showy applause-line contempt for all the same things that movement conservatives have contempt for. What’s not to like? He’s apologized for the extra wives and the palling around with Nancy Pelosi, so why not let bygones be bygones?

The next couple of months should be pretty fascinating. I continue to believe that, in the end, there are still lots of non-tea partiers voting in the Republican primaries, and eventually they’ll come to their senses and power Romney to victory. But I’m a lot less confident of that than I used to be. Romney just flatly can’t seem to break through his 25 percent poll ceiling, and although Gingrich may have a lot of baggage, his strategy of simply admitting he was wrong about that baggage and claiming that he’s now learned his lesson is disarmingly simple and—so far—devastatingly effective. If he’s actually learned enough self-discipline to keep from imploding, he seems to have a real chance. The Obama campaign team must be licking their chops.