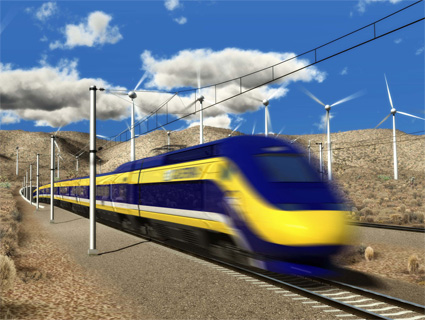 As regular readers know, I’ve been skeptical of California’s LA-SF bullet train from the beginning, and my skepticism has only grown as cost estimates have doubled to nearly $100 billion in only a few years. But unrealistic cost projections have never been the only reason to be dubious. There were also unrealistic ridership projections, along with unrealistic estimates of what the alternatives to high-speed rail would cost.

Until today, though, I didn’t know just how unrealistic some of those estimates were. Rail supporters say that even if the LA-SF train costs $100 billion, it’s still a bargain compared to the $171 billion it would cost to expand road and air infrastructure to handle the increased traffic between LA and San Francisco that we’re going to get regardless. But check this out:

The rail authority has relied heavily on New York-based Parsons Brinkerhoff, a contractor that helped fund the political campaign for the $9.9-billion bond measure passed by voters in 2008….In October, Parsons submitted the analysis that came up with the $171 billion, a number that initially appeared in the authority’s draft business plan released Nov. 1. In the study, Parsons first estimated how much passenger capacity the system would have at completion in 2033 and then calculated the cost for providing the same airport and highway capacity.

Parsons said the high-speed rail system could carry 116 million passengers a year, based on running trains with 1,000 seats both north and south every five minutes, 19 hours a day and 365 days a year. The study assumes the trains would be 70% full on average.

This is just jaw-droppingly shameless. There’s not even a pretense here of providing a reasonable, real-world traffic estimate that could be used to project the cost of alternative infrastructure. A high school sophomore who turned in work like this would get an F.

We are rapidly exiting the realm of rose-colored glasses and entering the realm of pure fantasy here. If liberals keep pushing this project forward in the face of plain evidence that its official justifications are brazenly preposterous, conservatives are going to be able to pound us year after year for wasting taxpayer money while we retreat to ever more ridiculous and self-serving defenses that make us laughingstocks in the public eye. And unless we put this project on hold until we can get some genuinely independent and plausible estimates of costs, ridership, and alternatives, we’ll deserve it.