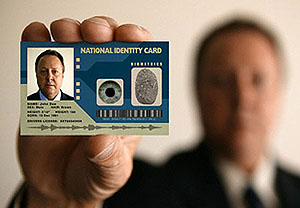 Murali writes today about one of my favorite semi-cranky hobbyhorses:

I live in Singapore and all citizens are required to have an Identity Card. (IC) The IC is very useful. It doubles as a library card, it serves as identification when I apply for overseas visas, or want to open a bank account etc. Someone’s IC also allows me to identify the other party if I get into an accident (i.e. who to pay or who to bill for damages etc etc). At this level [] there doesn’t seem to be anything wrong with it. So, what are the problems with having a mandatory IC policy?

There’s more, and you should read the whole thing. I usually break this topic into two separate issues:

But here’s the thing: we already do this for most people. Most of us already have picture IDs in the form of driver licenses. And nearly all of us have a permanent ID number in the form of a Social Security number. So like it or not, if you’re worried about having tons of information about yourself collected into computerized databases — well, that ship sailed a long time ago. It’s already happened.

Given that, what’s the real objection to formalizing this? I can suggest several benefits of a national ID card:

The usual objection to a national ID card revolves around the idea of a jackbooted police state being able to track your every move. But jackbooted or not, this is already possible unless you pretty much take yourself off the grid. Your Social Security number — excuse me, your Taxpayer Identification Number — is already used universally by the government, by your employer, by your bank, by credit bureaus, and by everyone else to keep track of data about you. It’s a done deal, and a national ID card wouldn’t change this one way or the other.

Now, there are still some legitimate objections. Perhaps you don’t think ID should be 100% reliable, that there ought to be a little bit of friction in the system. Or, more concretely, maybe you’re afraid that a national ID card can be misused too easily. We’ll end up with lots of color-coded symbols on the cards that indicate whether you’ve ever served time, whether you’re a sex offender, whether you have a concealed-carry permit, or whatnot. I think this is a legitimate concern, but I guess the question is whether it’s very likely to happen. Given the reality of partisan politics in America, I suspect it’s not.1

Bottom line: If we get the whole Nazi-inflected “papers please” thing out of our heads and look at a national ID card as just something to….identify ourselves, it’s really not very sinister at all. It’s mainly a way to make our lives more convenient. So what’s the real objection?

1Except, I’ll concede, for the sex offender thing. That’s driven us into a collective national insanity, and I’m halfway surprised we don’t already tattoo convicted sex offenders on their foreheads.