I wasn’t planning to revisit the creditmongering post I wrote earlier today, since I suspect that only a tiny fraction of my readership cares very much about it. But I’ve gotten a few responses to it that seem worth addressing, in particular this one from Aaron Carroll. So…..

Journalism first. I stick by my belief that being first with a garden-variety story by a few minutes or a few hours simply isn’t worth crediting. The person who got there first thinks it’s a big deal, but honestly, no one else does. Besides, journalism is a business. No one credits their competitors in other industries if they can help it, and I’m not sure why we expect journalists to be any different. So I guess my rule here is: If someone else breaks a genuinely big story, it’s right and proper to credit them. If 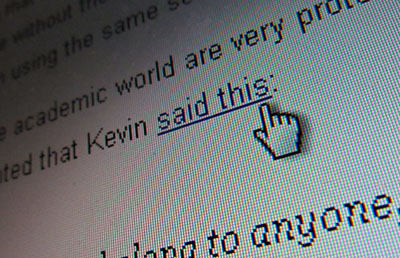 it’s just a few-hour lead on a piece of commodity news, get a life. The warm glow of being first is all you’re going to get out of it.

Next, blogging. After giving this some thought, I realized that I do follow some rough rules on linking and crediting. I’ve just never put them in writing. So here they are:

Next, academia. This is a whole different culture with its own rules. Extensive endnotes are common. Literature reviews are customary. Credit to others is splashed all over the place not only because it’s expected, but because it demonstrates a certain level of erudition on the part of the writer. Nothing else I’ve said here applies to academics.

Beyond that, though, several people have suggested that if you get an idea from someone, you should credit them regardless of any other linking/credit rules you might follow. This is where I’d make the distinction between ideas and IDEAS. The former is inspiration: if I read something that makes me want to dig into the plight of the long-term unemployed, I’m not likely to credit anyone. It’s just a topic. Lots of people have addressed it, and the fact that I happened to get my inspiration from one person rather than another probably doesn’t matter much.

But an IDEA is different: this is a very specific theory or model or explanation for something. Or maybe an original insight. If you mention an IDEA, or riff on it to produce one of your own, you should credit the originator.

One more thing. I think every blogger has had the experience of writing something, and then seeing someone else write something suspiciously similar a few hours later without giving credit. Be careful. I suspect that most of the time we’re getting worked up over a coincidence. Most of our ideas aren’t really as original as we think.

But that might just be my temperament speaking. I tend not to care much if I get credit for my ideas. Mainly, I just like to see them spread. If someone echoes me, then my ideas get broadcast into the ideasphere — and, truthfully, it’s probably more effective if it looks like someone has independently had the same thought than it is if they’re writing a post explicitly agreeing with me. So I’m happy either way. But I recognize that other people have different feelings about this and get a bigger kick than I do out of being the center of a new meme. So I guess maybe the overriding rule for credit is this: it doesn’t cost anything and it can’t hurt. If in doubt, give credit.