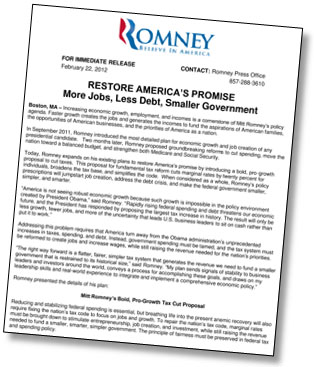 Mitt Romney has released his new tax plan, and it calls for a 20 percent across-the-board reduction in income tax rates, elimination of the estate tax, repeal of the AMT, and a 30 percent cut in the corporate tax rate. Not to worry, though. It’s designed to be revenue neutral because…it’s going to…um…something. I really don’t know how you get revenue neutral out of all this. I suppose by claiming that lower taxes will supercharge the economy and pay for themselves. That’s the usual wheeze, anyway.

Okay, so rich people will pay a lot less in taxes. But how about spending? Well, Romney says he plans to reduce spending by $500 billion in 2016. However, he doesn’t want to cut defense. He thinks that Medicare and Social Security reform should only affect “younger generations,” so he doesn’t plan to cut either of those either, at least not in the medium term. And interest on the debt is obviously outside his control.

So that still leaves us with $500 billion to cut out of the $1.7 trillion currently projected in domestic spending for 2016. How do you do that? Either with a 30 percent across-the-board cut or with smaller cuts to some programs and larger cuts to others. But which ones? Those are pretty big reductions. I wish guys like Romney had the guts to actually tell us where they want these cuts to fall, but they never do.

So this all seems like so much smoke and mirrors. But on the bright side, his plan for corporate taxes actually has some promise. In theory, anyway. He wants to lower the statutory rate, which would be okay if it’s done along with broadening the base. He wants to make the R&D tax credit permanent, which is a good idea. And he wants to shift to a territorial taxation system, where corporations are taxed only on the income they earn in the United States. With proper regulation, this is a perfectly fine idea too.

Now, in practice, Romney says he wants to broaden the corporate tax base but doesn’t say how, nor does he suggest any interest in the kind of rules it takes to make a territorial system work. But you never know. Those are potential negotiating points. It’s not impossible that Romney’s corporate tax plan could end up on the positive side of the ledger.