James Pethokoukis is the latest conservative to demand that Treasury Secretary Tim Geithner resign. Finally, something left and right can agree about! Lefties all hate Geithner too.

So what’s his offense this time? Answer: a plan for cutting corporate income tax rates that’s far too timid. Here are a few of the eight reasons this is a terrible idea:

Wow! That’s quite a bill of particulars. But you know what’s amazing? In this entire thousand-word blast Pethokoukis apparently doesn’t have room to explain the distinction between statutory tax rates and effective rates. But it only takes a sentence or two, so here it is. The statutory rate is the top rate in the tax table. Right now it’s 35% for corporations. The effective rate is what corporations actually pay after their accountants are 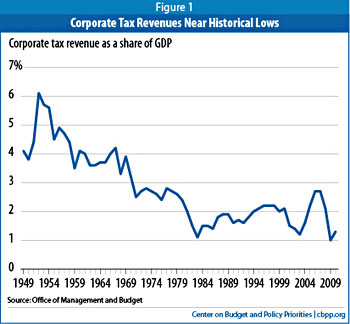 done combing the tax code for deductions and loopholes. The former is one of the highest in the world. That latter has been falling for years and is now one of the lowest.

That’s right! The actual federal income tax paid by corporations is one of the lowest in the world. Even if you think statutory rates are more important, surely this is germane to the conversation?

I say this as someone who’s on record as favoring a complete abolition of the corporate income tax — primarily because tax receipts from corporations are so low that I’m not sure they’re worth the bother anymore. Of course, I also acknowledge the need to make up the revenue elsewhere, since I don’t believe the supply-side fairy will magically do this for us. This would indeed create tax sheltering issues that might be insurmountable. Or might not. But in any case, you need to make up the revenue. It won’t happen automatically, no matter how often Arthur Laffer pretends it will.

UPDATE: Pethokoukis hauls out several strained studies that try to prove American corporations actually pay some of the highest taxes in the world. Sorry. The only way to do an apples-to-apples comparison is to look at corporate tax revenue as a percent of GDP and to let a neutral party apply a consistent methodology. The OECD does exactly that every year. Here’s a chart showing the corporate tax burden from 1982 through 2005. The United States is a little below the middle of the pack. 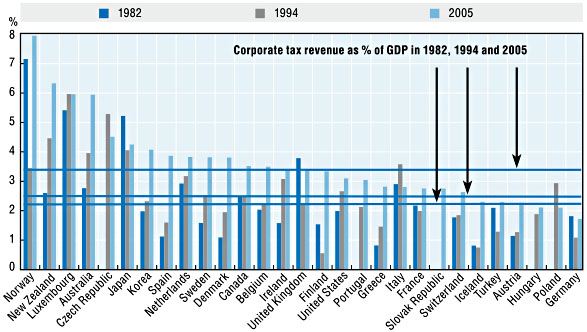 And here’s their latest chart. Our corporate tax burden has fallen dramatically since 2005, and if you read all the way to the end you’ll now find the United States at the very bottom. 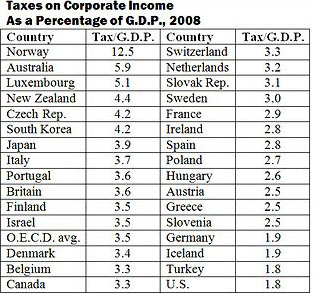