Every day there are several stories that seem to show up in about half the blogs I read. Today, for example, Mitt Romney said he doesn’t care about the poor; youth unemployment is sky high in Greece and Spain; and if we just let the Bush tax cuts expire, a big chunk of our deficit problem goes away. And then there’s Cardiff Garcia’s post over at Alphaville that reproduces a graph showing what the unemployment rate would be if all the discouraged workers who have left the labor force 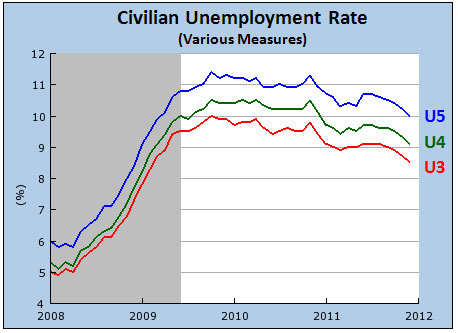 were still in it. Answer: bad. “This alternative measure has remained above 10 per cent since September 2009, and…has mostly just moved sideways.”

But wait. There’s nothing magical about this. The graph comes from Nomura, but the BLS already tracks this stuff in a variety of unemployment measures that are released every month. U3 is the usual headline measure, but there’s also U4, which is U3 plus all discouraged workers, and U5, which is U4 plus marginally attached workers. As the modified FRED chart on the right shows, all three of these measures have been declining in lockstep over the past couple of years. So even if you include all the folks who have just stopped looking for work, you still see a decline of about 1.5 points since the peak in 2009.

So color me confused. Unless the Nomura folks have some reason for thinking their measure is better than any of the BLS’s measures, it looks to me like unemployment has gone down no matter how you measure it.

UPDATE: Cardiff Garcia contacted the Nomura folks to ask about this, and they explained that their measure is a modification of U4. In a nutshell, U4 includes the unemployed plus “discouraged” workers — i.e., those who say they want to work but have given up because they believe there are no jobs available. That number has declined over the past two years.

The Nomura measure, by contrast, counts everyone who has exited the labor force for any reason other than retirement. They simply assume that all other labor force exits are for economic reasons of one kind or another.

I suppose either measure could make sense depending on what you’re most interested in. There’s probably always a small segment of the labor force that’s only barely interested in working, and that decides to stay home with the kids or write the great American novel given even the slightest incentive. Those folks are captured in the Nomura calculation but not in U4. I guess it’s up to you to decide which you find a more useful measure of the state of the economy.