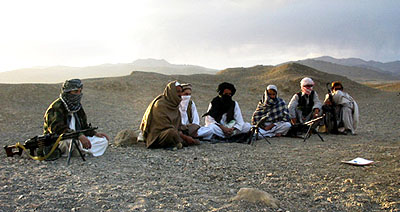 Domestic politics has absorbed most of my attention lately, so this came as more of a surprise to me than it probably should have:

Hours before dawn Thursday, Afghan assailants, including a man hired to teach Afghan soldiers to read, shot and killed two U.S. troops and wounded a third, Afghan and American officials said. The soldiers slain at the base in Kandahar province were the fifth and sixth U.S. military personnel to die in a span of eight days at the hands of Afghans they had worked alongside. With these latest killings, the proportion of NATO overall military fatalities caused by such “insider” shootings this year stood at nearly one in five.

There are more details later in the story, and then this:

The deaths come against a backdrop of deepening mutual mistrust between many Afghans and their Western counterparts after riots tore through the country last week over what officials said was the inadvertent burning of copies of the Koran at a U.S.-run military base….Publicly, U.S. officials have painted the Koran incident as a setback, but scarcely one that could shatter longtime bonds. They point out that the rioters made up only a tiny fraction of the Afghan population, and assert that it was a situation in which the Taliban and other Islamist militants seized an opportunity to both whip up and blend into the crowds.

But that’s the whole point. Of course this is a case of the Taliban taking advantage of an incident to demagogue the U.S. presence and whip local crowds into a frenzy. Pretty obviously, though, this is the situation we’re in. Our presence, for a variety of reasons,1 is unpopular enough that the Taliban can easily take advantage of small incidents like this. And they will. There will always be provocations of one kind or another. It’s inevitable when you’ve got a hundred thousand troops who are spread out over a big, unfamiliar country and constantly under extreme stress.

Today’s incident was an accidental Koran burning. Tomorrow’s incident will be something else. And the next day it will be something different still. But they all point in the same direction: counterinsurgency had its chance, and it’s just not going to work in Afghanistan. It’s time to wish the Afghans godspeed and let them have their country back.

1For example, the fact that our military operations routinely kill and maim Afghan children and other civilians. It’s not deliberate, but that doesn’t matter. We still do it.