Before you read this, I want to remind you that only a few months ago Michele Bachmann was considered a serious contender for the Republican nomination 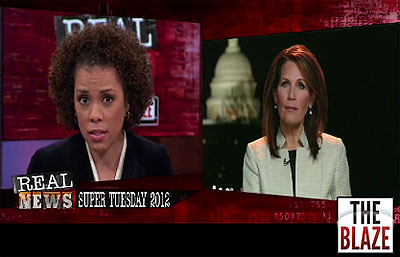 for president. Hard to believe, I know, but it’s true. With that thought firmly in mind, here is Bachmann last night:

Kathleen Sebelius, the Health and Human Services secretary, she said that it’s important that we have contraceptives because that prevents pregnancy, and pregnancy is more expensive to the federal government. Going with that logic, according to our own Health and Human Services secretary, it isn’t farfetched to think that the president of the United States could say, we need to save healthcare expenses, the federal government will only pay for one baby to be born in the hospital per family, or two babies to be born per family. That could happen. You think it couldn’t?

This was in an interview over at The Blaze, Glenn Beck’s website, and even the Blaze folks were sort of aghast that Bachmann could suggest something like this. But it’s comforting in a way. This is old school Bachmann.

But as long as we’re on the subject, here’s a wee bit of factmongering for you. Did you know that lots of women have no health insurance, and the only reason they have any maternity coverage at all is because of federal programs like Medicaid and CHIP? It’s true! It turns out that about 40% of all births in the United States are paid for by these programs.

And even women who are insured don’t always have maternity coverage. Lots of them do, thanks to the Pregnancy Discrimination Act (PDA) of 1978, which conservatives and the business community hated at the time. But there are still gaps: small businesses are exempt, and most individual insurance plans don’t cover maternity expenses. Obamacare will take care of that shortly, but of course, conservatives and the business community consider that an act of unprecedented tyranny.

Your garden variety hospital delivery — not counting prenatal and postnatal care — will set you back about ten grand or so these days. Most people would have a hard time affording that, but thanks to Medicaid, CHIP, the PDA, and Obamacare, most women are either covered or soon will be. In other words, the only reason most women can afford modern childbirth in modern hospitals at all is because of various federal laws that either mandate it in the private sector or pay for it out of public funds. If it weren’t for that, most families couldn’t even have one baby born in the hospital, let alone two. That’s some pretty pro-family policy from us liberals, no?

(Via an equally dumbfounded Ed Kilgore.)