Glenn Greenwald commends to our attention today a piece by Jeremy Scahill about the imprisonment of Yemeni journalist Abdulelah Haider Shaye. You should read all of Scahill’s piece, but here’s the nickel summary for those of you who won’t.

On December 17, 2009, the Yemeni government — “with American assistance” — launched an attack on an alleged al-Qaeda site in the village of al Majala. The Yemeni government claimed that its own air force was responsible for the attack, but Shaye visited the site and 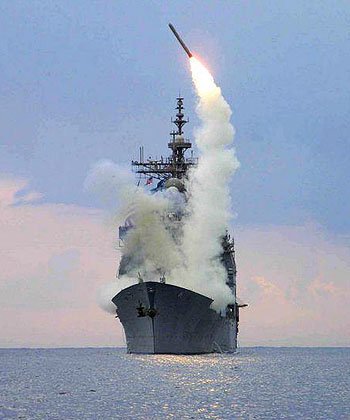 photographed pieces of Tomahawk missiles (helpfully labeled “Made in the USA”) that the Yemeni air force doesn’t possess. He also revealed that 14 women and 21 children were among the casualties. Seven months later Shaye was seized by Yemeni security forces who, according to a friend of Shaye’s, warned him to shut up and then dumped him back on the street. But Shaye didn’t shut up, and a month later he was arrested, thrown in prison, probably tortured, and then tried and convicted on charges of aiding and abetting al-Qaeda.

But that’s not the end of the story. Tribal leaders immediately began pressuring the Yemeni president to pardon Shaye, and a month after Shaye’s conviction a pardon was in the works. But then, on February 3rd, 2011, in a phone call, President Obama “expressed concern” over Shaye’s release. After that the pardon was shelved and Shaye remains in prison to this day.

But why? “There is no doubt that Shaye was reporting facts that both the Yemeni and US government wanted to suppress,” says Scahill, and he quotes Gregory Johnsen, a Yemen scholar at Princeton University who was in frequent contact with Shaye, saying much the same thing: “Certainly Shaye’s reports were an embarrassment for the US and Yemeni government,” says Johnsen, “because at a time when both governments were seeking and failing to kill key leaders within AQAP, this single journalist with his camera and computer was able to locate these same leaders and interview them.”

Scahill is circumspect about going further, but Greenwald isn’t:

There is one reason that the world knows the truth about what really happened in al Majala that day: because the Yemeni journalist, Abdulelah Haider Shaye, traveled there….Shaye’s real crime is that he reported facts that the U.S. government and its Yemeni client regime wanted suppressed.

Now we get to the part where I wonder what’s really going on. Because here’s the thing: the attack on al Majala was no secret. It happened on December 17, and the very next day, on its nightly newscast, ABC News reported this:

….Until tonight, American officials had hedged about any U.S. role in the strikes against Yemen and news reports from Yemen attributed the attacks to the Yemen Air Force.

….Along with the two U.S. cruise missile attacks, Yemen security forces carried out raids in three separate locations. As many as 120 people were killed in the three raids, according to reports from Yemen, and opposition leaders said many of the dead were innocent civilians.

This story was picked up fairly widely, including in this detailed report from Bill Roggio and in this post from Glenn himself. So while Shaye’s photos might have been the kind of smoking-gun proof you’d need in a courtroom, within a few hours of the strike it was common knowledge that U.S. cruise missiles had done most of the damage and that there were local reports of many civilian casualties.

So is President Obama keeping an innocent Yemeni journalist in prison merely because he reported facts that Obama wanted suppressed? If I said that I find that hard to believe, I supposed I’d be accused of terminal naiveté or possibly an acute case of Obama worship. But what’s the alternative? Everything that Shaye reported in 2010 had long since been common knowledge. Obama has suffered, as near as I can tell, literally zero embarrassment from this episode. The al Majala attack got a small bit of media attention when it happened and has been completely forgotten since.

So what kind of person would pressure the Yemeni president to keep an innocent journalist in prison over a slight so tiny as to be nearly nonexistent? Almost literally, this would be the act of a sociopath.

The U.S. government insists that Shaye is no mere journalist. “Shaye is in jail because he was facilitating Al Qaeda and its planning for attacks on Americans and therefore we have a very direct interest in his case and his imprisonment,” says Gerald Feierstein, the U.S. ambassador to Yemen. Is that true? I have no idea.

But which do I find more likely? That Shaye is indeed affiliated with al-Qaeda based on evidence that hasn’t been made public? Or that Barack Obama is a sociopath who pressures foreign leaders to keep innocent journalists in prison based on the fact that they very slightly annoy him? Call me what you will, but I have to go with Door A. U.S. attacks within Yemen might be bad policy. The entire war on al-Qaeda might be bad policy. What’s more, Obama — along with the entire security apparatus of the United States — might be specifically wrong about Shaye. But I don’t believe that they’re simply making this story up because of a basically inconsequential piece that Shaye wrote two years ago. That just doesn’t add up.