Attorney General Eric Holder gave a speech today that, among other things, explained at length why the Obama administration believes it has the authority to unilaterally order the killing of a U.S. citizen abroad. Adam Serwer has a good summary here, but I want to focus narrowly on the questions of due process and oversight raised in the speech. Here’s Holder:

Let me be clear: an operation using lethal force in a foreign country, targeted against a U.S. citizen who is a senior operational leader of al Qaeda or associated forces, and who is actively engaged in planning to kill Americans, would be lawful at least in the following circumstances: First, the U.S. government has determined, after a thorough and careful review, that the individual poses an imminent threat of violent attack against the United States; second, capture is not feasible; and third, the operation would be conducted in a manner consistent with applicable law of war principles.

….Some have argued that the President is required to get permission from a federal court before taking action against a United States citizen who is a senior operational leader of al Qaeda or associated forces. This is simply 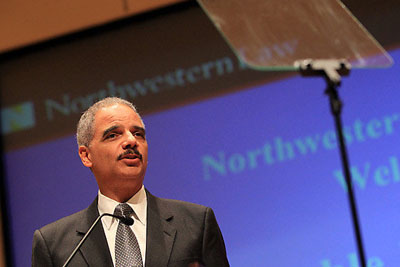 This is, as far as I know, legally correct. “Due process” doesn’t always mean a traditional trial. However, the “balancing approach” toward due process that Holder mentions earlier in the speech is generally meant to keep full-blown trials from being required even for fairly minor offenses, something that could grind the criminal justice system to a halt. It’s not meant to demean the due process required for something as serious as targeting someone for killing. As Holder acknowledges, “An individual’s interest in making sure that the government does not target him erroneously could not be more significant.” Clearly, then, whatever procedure is used here, even if it’s not a conventional jury trial, needs to be of the most careful and serious sort. And Holder recognizes this, saying that there should be “robust oversight” of the executive branch in cases like this. So what does that mean?

Which is why, in keeping with the law and our constitutional system of checks and balances, the Executive Branch regularly informs the appropriate members of Congress about our counterterrorism activities, including the legal framework, and would of course follow the same practice where lethal force is used against United States citizens….These circumstances are sufficient under the Constitution for the United States to use lethal force against a U.S. citizen abroad.

That’s it! The executive branch “informs” Congress. That’s the robust oversight Holder agrees is necessary for cases like this.

I’m glad Holder gave this speech. I’m glad that he expanded (a bit) on the three circumstances that govern the Obama administration’s decisions to kill U.S. citizens abroad. I’m glad he agrees that these decisions are “extraordinarily weighty” and “among the gravest that government leaders can face.”

Nonetheless, even more than a thousand words of throat clearing can’t hide the fact that Holder simply provided no evidence that the rigor of the executive branch’s due process procedures matches his rhetoric; no evidence that these procedures are consistently followed; and negative evidence that there’s any reasonable oversight of the process. Merely informing Congress is the farthest thing imaginable from rigorous, independent oversight.

Holder’s job, of course, was an impossible one. The Obama administration, like the Bush administration before it, has made a deliberate decision that actions like this are authorized by a combination of the 2001 AUMF and the president’s inherent commander-in-chief powers. By definition, this means that any oversight which limits his actions, even potentially, is unacceptable. And yet, a significant chunk of the public thinks oversight of the executive branch is a good idea. This means that lip service must be paid.

It’s a circle that can’t be squared. Publicly, Holder has to say that oversight is essential, but in private the actual procedures themselves have to remain toothless. There was never any way to camouflage that, and Holder didn’t even really try. If he truly thinks, as he said, that this is “not a departure from our laws and our values,” he has a funny idea of what our laws and values are.

POSTSCRIPT: This post wasn’t about my own position on this topic, but here it is. I agree that we’re at war. Like it or not, the AUMF is an extremely broad grant of authority. I agree that stateless terrorists pose unique challenges. I agree that targeting them for killing is sometimes necessary, even if they’re U.S. citizens. I agree that Holder’s three principles form a good starting point for deciding when a targeted killing is justified.

But it’s simply not tolerable to take the view that the entire world is now a battlefield, and therefore battlefield rules of engagement apply everywhere. If you want to kill a U.S. citizen outside of a traditional hot battlefield, there needs to be independent oversight. The FISA court performs this function for surveillance, and we know from experience that it rarely gets in the government’s way. But at least it’s technically independent and forces the executive branch to follow its own rules. It’s the absolute minimum that we should require for targeted killings too.