So how are those Iranian oil sanctions going? Stuart Staniford took a crack at figuring it out yesterday, but luckily for me I got busy with other stuff and didn’t link to his post. “Luckily” because he’s now spent several hours obsessing even more over Iranian production data and has what he thinks is a more reliable look at how much oil Iran is producing. The chart is below. Stuart’s conclusion:

My interpretation of the [data] is that Iran used to be able to produce about 4mbd of oil. They voluntarily reduced production following the 2001 recession (in line with the behavior of other OPEC nations at the time). However, while the reduction at the end of 2008 may also have been voluntary, the fact that they’ve made no increase in production in 2011 — the opposite in fact — suggests they’ve lost the capacity to produce (or at least export) that much oil. I assume this is due to western sanctions.

Whether the sanctions are “working” depends on whether you think we ought to be pressuring Iran over its nuclear program. But that’s certainly what the Obama administration wants to do, and judged on their own terms it looks like the sanctions are working. If Iran really has been forced to reduce production by 400,000 bbd, that comes to about $40 million per day, or $14 billion per year. Depending on how you count, that amounts to about 2-3% of GDP.

UPDATE: But even if oil production is down, isn’t that more than made up for by higher prices caused by the sanctions in the first place? Maybe. It depends on how much oil Iran sells on the spot market and how much is tied up in long-term contracts. I’m not sure if anyone really knows that, and I don’t know what the terms of Iran’s long-term contracts are anyway. So this is, admittedly, a bit of a crapshoot. Either way, though, Iran certainly seems to be selling less than they could if the sanctions didn’t exist. 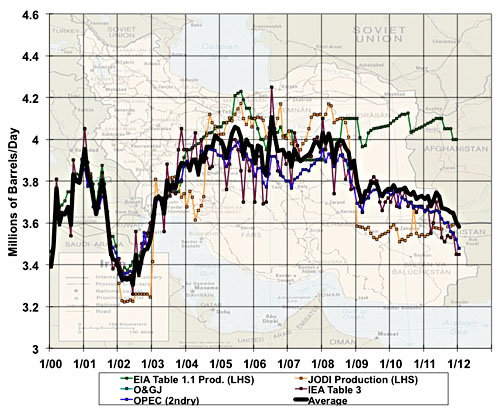