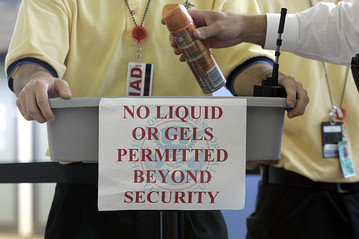 Kip Hawley, former head of the TSA, has some suggestions this weekend for making airport security screening more convenient without lowering safety standards. As it turns out, most of his suggestions would make life modestly easier for passengers, but not wildly so. (For that, you need Bruce Schneier.) In fact, “randomizing security,” though it might be a good idea, would actually be a pain in the ass. I don’t like taking my shoes off any more than the next guy, but frankly, I’d prefer to either do it or not. I’m a lot happier if I know the rules and can just follow them.

In any case, none of his suggestions involve shoes (still dangerous, he says), full-body scanners, pat-downs, or any of the things that do the most to piss us off. But there was this:

2. Allow all liquids: Simple checkpoint signage, a small software update and some traffic management are all that stand between you and bringing all your liquids on every U.S. flight. Really.

Say what? Here’s the detail:

I was initially against a ban on liquids as well, because I thought that, with proper briefing, TSA officers could stop al Qaeda’s new liquid bombs. Unfortunately, al Qaeda’s advancing skill with hydrogen-peroxide-based bombs made a total liquid ban necessary for a brief period and a restriction on the amount of liquid one could carry on a plane necessary thereafter.

Existing scanners could allow passengers to carry on any amount of liquid they want, so long as they put it in the gray bins. The scanners have yet to be used in this way because of concern for the large number of false alarms and delays that they could cause. When I left TSA in 2009, the plan was to designate “liquid lanes” where waits might be longer but passengers could board with snow globes, beauty products or booze. That plan is still sitting on someone’s desk.

This leaves me more puzzled than before. I’ve already heard about new scanners that supposedly read the molecular structure of liquids in order to distinguish baby formula from C4. But those are new devices. Hawley is suggesting that all our current scanners could also do this with “a small software update.” So what exactly are the “traffic management” issues that have prevented this? Does liquid scanning work slowly? Is it unreliable? Or what? Inquiring minds want to know.