A couple of weeks ago I published a chart showing that conservative trust in science has plummeted over the past few decades, while liberal and independent attitudes have 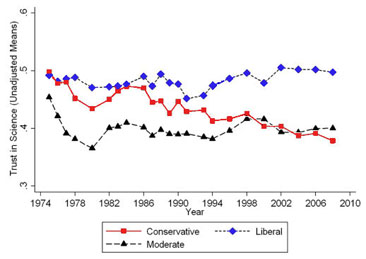 remained fairly steady (liberals with high trust levels and indies with low trust levels). However, several commenters pointed out that this result was derived from GSS survey data, and the actual question was about institutions:

So conservatives were becoming less confident in the people who run the scientific community, which is not quite the same as becoming less confident in science as a discipline. This is fair up to a point, though I suspect that most people answering the question don’t generally make distinctions quite that fine. What’s more, in the aftermath of the 70s liberals had plenty of reason to lose confidence in some aspects of the scientific community too — this was a period in which corporate sponsorship of science was a growing flashpoint — but that didn’t cause them to change their general level of trust. The Reagan-era decline was solely a conservative phenomenon.

All that said, though, the New York Times reported a couple of days ago that over the past decade or so there might well be reason for all of us to be a little more skeptical of scientific results than we have been. A couple of years ago, Dr. Ferric Fang, editor in chief of Infection and Immunity, discovered that one of his authors had doctored several papers:

Dr. Fang became curious how far the rot extended. To find out, he teamed up with a fellow editor at the journal, Dr. Arturo Casadevall of the Albert Einstein College of Medicine in New York. And before long they reached a troubling conclusion: not only that retractions were rising at an alarming rate, but that retractions were just a manifestation of a much more profound problem — “a symptom of a dysfunctional scientific climate,” as Dr. Fang put it.

….Last month, in a pair of editorials in Infection and Immunity, the two editors issued a plea for fundamental reforms. They also presented their concerns at the March 27 meeting of the National Academies of Sciences committee on science, technology and the 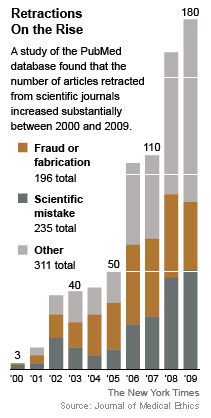 law. Members of the committee agreed with their assessment. “I think this is really coming to a head,” said Dr. Roberta B. Ness, dean of the University of Texas School of Public Health. And Dr. David Korn of Harvard Medical School agreed that “there are problems all through the system.”

….Critics like Dr. Fang and Dr. Casadevall argue that science has changed in some worrying ways in recent decades — especially biomedical research, which consumes a larger and larger share of government science spending.

It’s not clear how far this extends outside the biomedical community, and it’s also not clear if this is genuinely new behavior, or if bad papers are simply more likely to get caught than in the past. Either way, though, the research community in general had better listen to Fang. Declining public trust in science may be primarily a conservative phenomenon right now, motivated by hostility toward evolution and climate science, but independents have had low trust levels ever since the 70s, and there are plenty of liberals who could probably be tipped into the anti-science camp pretty easily too. Time to clean house, folks.