When we think about the money supply, we typically think about the Fed’s measures of actual money (M1, M2, etc.) along with the various things that can affect how this money sloshes around the system (multipliers, fed funds rates, reserve requirements, etc.). But debt matters too. If banks tighten up on the amount they’re willing to loan, that affects the money supply as well.

Over at FT Alphaville, Cardiff Garcia summarizes a new Credit Suisse report on exactly this issue, which expands on the previous work of Manmohan Singh. When a particular type of debt gets devalued — when creditors are required to take a haircut on, say, Greek bonds or mortgage-backed CDOs — that entire category of debt is worth less as collateral. Think of it this way: If you hold an ultra-safe bond worth $100, that’s $100 in cash you don’t need since you can instantly use your bond as collateral to raise $100 in the shadow banking system. But if your category of bond takes a haircut of 20%, suddenly you can only use it to raise $80. That means you’re going to hoard an extra $20 in cash. And that’s cash that’s not available to anyone else. Effectively, the money supply has shrunk. The chart below shows what happened during the financial panic of 2007-08: 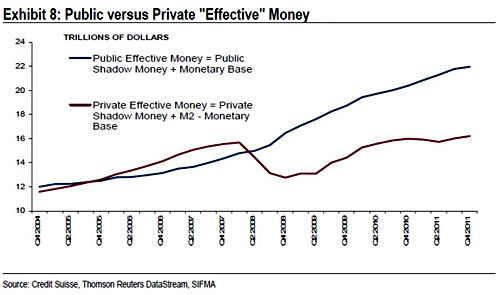 So is this just a history lesson? No. We’re still living through it, according to Credit Suisse:

We expect [private shadow money] to contract further in 2012, driven by negative net issuance of financial debt of nearly half a trillion dollars….This potential fall in 2012 is tiny compared to 2008, but it comes at a time when fiscal deficits are shrinking.

The moral of the story is that we’re unlikley to face significant inflationary pressure until the total supply of money, both public and private, gets back to its pre-crisis trend level. What’s more, as Garcia says, “that does lead to an argument against tightening fiscal policy too quickly: fiscal consolidation tightens monetary policy also.”

There’s much more at the link, all well worth reading. We live in a wildly complex financial world these days, and we’re still groping our way toward understanding it fully. But if the shadow banking story is as important as it now seems to be, public policy needs to take it far more seriously. It’s not time yet for austerity.