In his new book — which I think I have a copy of but haven’t read yet — economist James Galbraith takes a deep look at income inequality and concludes that it’s been rising everywhere in the world. This suggests it’s primarily been driven by macro changes in the global economy, not by specific changes in individual countries. Brad Plumer asks him what happened:

The current rise in U.S. economic inequality really only gets underway starting in about 1980. What changed then?

Between the end of World War II and 1980, economic growth in the United States is mostly an equalizing force, and job creation isn’t dependent on rising economic inequality. But after 1980, economic booms and rising inequality go hand in hand. So what’s going on? In 1980, we really went through a fundamental transformation. We stopped being a wage-led economy with a growing public sector that was providing new services. Programs like Medicare and Medicaid were major drivers of growth in the 1970s.

Instead, we became a credit-driven economy. What the evidence in the U.S. shows is that the rise in inequality is associated with credit booms, which are often periods of great prosperity. We had one in the late 1990s with information technology and one in the 2000s with housing, before everything fell apart. But this is also a sign of instability — the crash that follows is very ugly business. If we’re going to go forward with growth on a more sustainable basis, then controlling inequality and controlling instability are the same issue. One is an expression of the other.

….This view runs counter to what a lot of economists argue, which is that economic inequality has been driven by a “skills bias,” where there are growing returns to being well-educated.

Yes, I think the skills bias argument — the notion that inequality is being driven by technological change and education and the supply of skills — is comprehensively rebutted by the evidence. What you had was a concentration of income in very particular sectors. In the 1990s it was tech and in 2000s it was in real estate and the military, and those were closely related to the credit cycle. That’s what’s driving the data.

And this distinction has important implications for policy, for how one thinks about what should be done about this. If skills bias is the explanation, then that at most supports a case for more investment in education and training. It’s essentially saying that 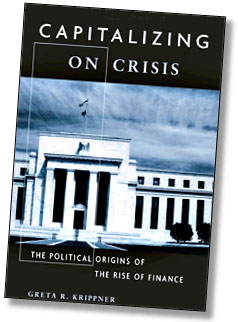 I don’t know if Galbraith is claiming that credit cycles are literally responsible for all of the increase in income inequality, but I certainly wouldn’t be surprised if it were responsible for a very large part of it. The 1970s are an underappreciated decade in this regard. That was when the old Bretton Woods system broke down and we flailed our way into a new era of looser financial rules, the globalization of finance, and systemically low interest rates. There was no high-level conspiracy that drove the new system we eventually adopted, but by hook or by crook, pretty much every political and economic response to the 70s ended up benefiting Wall Street and the very rich.

For more, I recommend Greta Krippner’s Capitalizing on Crisis: The Political Origins of the Rise of Finance. It’s a very good introduction to how we got where we are today.