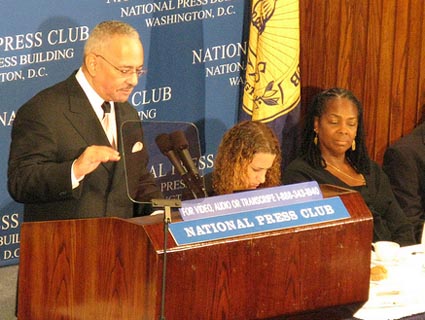 Jeremiah Wright at the Press Club in 2008.<a href="http://www.flickr.com/photos/talkradionews/2450263236/sizes/m/in/photostream/" target="_blank">Flickr/Talk Radio News Service</a>

There’s a group of Republicans who are convinced that if Senator John McCain (R-Ariz.) had simply run Jeremiah Wright ads twenty-four hours a day during the 2008 election, Barack Obama would not be in the White House. This time around, the New York Times reports, (in what sounds suspiciously like a fundraising bid) a Republican Super-PAC called the Ending Spending Fund, bankrolled in part by TD Ameritrade founder Joe Ricketts, is planning to drive the Wright stake into Obama’s vampire heart and leave him out for the sun:

The $10 million plan, one of several being studied by Mr. Ricketts, includes preparations for how to respond to the charges of race-baiting it envisions if it highlights Mr. Obama’s former ties to Mr. Wright, who espouses what is known as “black liberation theology.”

The group suggested hiring as a spokesman an “extremely literate conservative African-American” who can argue that Mr. Obama misled the nation by presenting himself as what the proposal calls a “metrosexual, black Abe Lincoln.”

Conservative attempts to deflect charges of race baiting by using minority spokespeople are really obvious, but it’s still funny to see this kind of cynicism expressed so frankly. (You can read more on the Ricketts plan from my colleague Tim Murphy.)

The 2012 election was always going to be ugly, with Republicans looking to maximize their share of a shrinking white electorate and the Democrats increasingly dependent on their coalition of young urban whites and minorities. But the idea that, if not for McCain’s honorable restraint, Americans would have voted against Obama is mostly a figment of the conservative imagination. A Pew study in 2008 found that a majority of Americans (including 50 percent of Republicans!) felt the media overcovered the Jeremiah Wright story. If that didn’t destroy Obama in 2008, when he was still something of a unknown quantity, it won’t work after four years of getting to know him. Everyone who could be convinced that Wright is the key to Obama’s soul has already been convinced.

The storyboards for the Wright ad, though, implicitly accept this. Instead of merely highlighting Wright, the ad actually adopts the Rush Limbaugh black revenge fantasy theory of the Obama presidency, namely that America’s ongoing economic stagnation is not the result of an incorrect or inadequate response to the recession, but that it was deliberately engineered by Obama as payback against white people. Under this theory, Obama has deliberately nurtered the economic malaise—one that threatens his chances at a second term, led to higher levels of unemployment among non-whites than whites, and resulted in the evaporation of minority wealth gains—just to get back at whitey. Like the idea of Obama being an amalgamation of President Jimmy Carter and the Black Panther Party’s Huey Newton, this deranged explanation collapses under the crushing weight of its own contradictions.

Although the Internet will be forever grateful for the introduction of the term “black metrosexual Abraham Lincoln,” the term really says everything about the twisted lens through which this group of Republican strategists understands race and masculinity. Put simply, the group is going to try to convince voters that Obama is the type of black man they cross the street to avoid. That didn’t work in 2008, it’s hard to see how anyone who wasn’t already working from the same distorted understanding of race is going to buy it now. For all of America’s lingering problems with race, racism just isn’t the silver bullet.

Adam Serwer is filling in while Kevin Drum is on vacation.