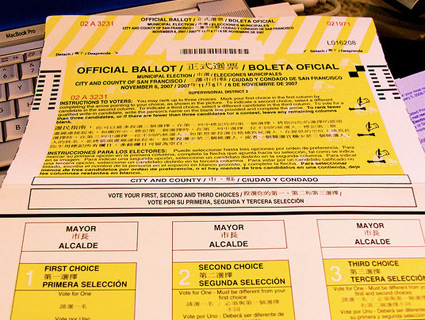 From the time I started blogging about a decade ago I’ve been writing somewhat frantically about the GOP efforts to suppress the vote. This should not be surprising since I started writing online in the aftermath of the most dubious election result in history: the infamous Bush v. Gore.

Vote suppression has been with us for centuries, of course. Jim Crow was built on it. Very famous and important Americans have participated in it, including former Chief Justice William Rehnquist. But according to a 2004 report by the Center for Voting Rights it wasn’t until the Jesse Jackson campaign in the 1980s that the Republicans began to organize nationally:

Democratic activist Donna Brazile, a Jackson worker and Albert Gore’s campaign manager in 2000, said “There were all sorts of groups out there doing voter registration. Some time after the ’86 election, massive purging started taking place. It was a wicked practice that took place all over the country, especially in the deep South. Democrats retook the Senate in 1986, and [Republican] groups went on a rampage on the premise they were cleaning up the rolls. The campaign then was targeted toward African-Americans.” As in the past, Republicans justified the purges in the name of preventing the unregistered from voting. But Democrats charged vote suppression.

They formed a group called the Republican National Lawyers Association for the purpose of manipulating the voting laws in all 50 states to the benefit of the party. Of course, they said it was for the purpose of stopping “voter fraud” but since there was and is no evidence of voter fraud, vote suppression was the obvious intent. They learned the ins and outs of all local and state voting rules and figured out how to use them for their own electoral advantage. And with the help of other conservative groups like ALEC, they set about making it harder to register and harder to vote. They really made their bones in the 2000 recount, when the call went out the morning after the election for their lawyers to descend on Florida. The rest is history. Well, it’s deja vu all over again. Here’s Ari Berman:

Back in 2000, 12,000 eligible voters—a number twenty-two times larger than George W. Bush’s 537 vote triumph over Al Gore—were wrongly identified as convicted felons and purged from the voting rolls in Florida, according to the Brennan Center for Justice. African Americans, who favored Gore over Bush by 86 points, accounted for 11 percent of the state’s electorate but 41 percent of those purged. Jeb Bush attempted a repeat performance in 2004 to help his brother win reelection but was forced to back off in the face of a public outcry.

Yet with another close election looming, Florida Republicans have returned to their voter-scrubbing ways. The latest purge comes on the heels of a trio of new voting restrictions passed by Florida Republicans last year, disenfranchising 100,000 previously eligible ex-felons who’d been granted the right to vote under GOP Governor Charlie Crist in 2008; shutting down non-partisan voter registration drives; and cutting back on early voting. The measures, the effect of which will be to depress Democratic turnout in November, are similar to voting curbs passed by Republicans in more than a dozen states, on the bogus pretext of combating “voter fraud” but with the very deliberate goal of shaping the electorate to the GOP’s advantage before a single vote has been cast.

The whole story is shocking in its brazenness.

“The reality is that in jurisdictions across the country, overt and subtle forms of discrimination remain all too common,” Holder said this week.

I have long wondered why the Democrats haven’t seemed to take this seriously. It’s been happening in slow motion, but it’s been happening in plain sight. It wasn’t just the 2000 election, although that should have been enough for the Democratic party to launch a full scale defense against this sort of connivance. And it carried on throughout the following decade in elections throughout the country. You’ll recall that even the US Attorney firing scandal was largely about their failure to flout election laws in favor of Republicans. Better late than never, the Democrats seemed to wake up this week:

Attorney General Eric Holder told members of the Congressional Black Caucus and the Conference of National Black Churches on Wednesday that the right to vote was threatened across the country. “The reality is that in jurisdictions across the country, both overt and subtle forms of discrimination remain all too common and have not yet been relegated to the pages of history,” Holder told the audience, made up of black church and political leaders, during a faith leaders summit in Washington. He also reaffirmed the Justice Department’s commitment to the Voting Rights Act, and in particular, the section of the law which prohibits certain states from making changes to their election laws without first getting federal approval, and which has been the focus of several recent court challenges.

And he followed through:

The Justice Department sent a letter to Florida Secretary of State Ken Detzner Thursday evening demanding the state cease purging its voting rolls because the process it is using has not been cleared under the Voting Rights Act, TPM has learned. DOJ also said that Florida’s voter roll purge violated the National Voter Registration Act, which stipulates that voter roll maintenance should have ceased 90 days before an election, which given Florida’s August 14 primary, meant May 16. Five of Florida’s counties are subject to the Voting Rights Act, but the state never sought permission from either the Justice Department or a federal court to implement its voter roll maintenance program. Florida officials said they were trying to remove non-citizens from the voting rolls, but a flawed process led to several U.S. citizens being asked to prove their citizenship status or be kicked off the rolls.

Republican state governments around the country have been working overtime to manipulate the electoral laws and shut down the Democrats’ organizing institutions, from ACORN to unions, and wealthy plutocrats have put huge money behind the effort. With the exception of Wisconsin, the Democrats have been behaving like potted plants in response. One would have thought the 2000 election would have been enough to energize them to protect the franchise, but it clearly wasn’t. Let’s hope it doesn’t take another stolen election to convince them.

Heather Digby Parton is guest blogging while Kevin Drum is on vacation.