Ed Kilgore has been sounding the alarms over Mitt Romney’s education proposals for a couple of months now, and I keep meaning — but somehow forgetting — to link to his posts about this. It’s probably all part of my love-hate relationship with education policy in general. But today he’s got another post up on the subject, so let’s take a look. He’s riffing on a TPM piece about the kudzu-like growth of Bobby Jindal’s voucher program in Louisiana:

In heading his state in the direction of universally available vouchers rationalized by public school failure, Jindal is not, of course, holding any of the private school beneficiaries accountable for results, or for common curricula, or, it appears, for much of anything. A big chunk of the money already out there is being snapped up by 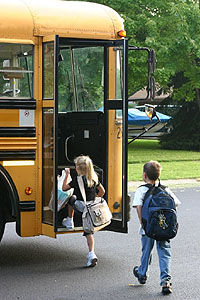 conservative evangelical schools with exotic and hardly public-minded curricular offerings, with the theory being that any public oversight would interfere with the accountability provided by “the market.” So if you want your kid to attend, at public expense, the Christian Nationalist Academy for Servant-Leader Boys & Fecund Submissive Girls, that’s okay by Bobby.

Does that last sentence sound a wee bit unfair? Well, here’s a Reuters report from a few weeks ago about where kids with vouchers are actually likely to end up:

The top schools [] have just a handful of slots open….Far more openings are available at smaller, less prestigious religious schools, including some that are just a few years old and others that have struggled to attract tuition-paying students.

The school willing to accept the most voucher students — 314 — is New Living Word in Ruston, which has a top-ranked basketball team but no library. Students spend most of the day watching TVs in bare-bones classrooms. Each lesson consists of an instructional DVD that intersperses Biblical verses with subjects such chemistry or composition.

….At Eternity Christian Academy in Westlake, pastor-turned-principal Marie Carrier hopes to secure extra space to enroll 135 voucher students, though she now has room for just a few dozen. Her first- through eighth-grade students sit in cubicles for much of the day and move at their own pace through Christian workbooks, such as a beginning science text that explains “what God made” on each of the six days of creation. They are not exposed to the theory of evolution. “We try to stay away from all those things that might confuse our children,” Carrier said.

But let’s not be too hasty. If these kids are doing well, maybe we shouldn’t care if they get their lessons from DVDs liberally sprinkled with Bible verses. The problem is that while public schools — and, increasingly, public school teachers — are being held rigidly accountable for their students’ test scores, most voucher schools aren’t. Here’s the Louisiana Budget Project:

Louisiana requires almost no accountability from voucher schools….While voucher students are required to take the same assessment tests as public school students, there are no penalties for private schools if they fail to measure up to their public counterparts. In fact, Gov. Jindal vetoed language in a 2011 appropriations bill that would have removed participating schools if their students’ scores lagged those in the lowest performing schools in the Recovery School District, which incorporates most New Orleans public schools.

And maybe it will. But this has always been the Achilles’ Heel of the voucher movement: its virulent opposition to holding private schools to the same standards as public schools. In some places this means not requiring students to take standardized tests at all, while in other places — like Louisiana — it means requiring the tests but not using them to evaluate how well schools are doing. In other words, they want taxpayer dollars without being accountable to taxpayers.

To the best of my knowledge, research on school choice remains inconclusive. Some studies show benefits from voucher and charter schools, others don’t. Part of the reason for this is that test data on voucher schools just isn’t always available, largely thanks to lawmakers who are afraid of what it might show. So if Mitt Romney plans to adopt vouchers as his main education proposal — and he does — it would be nice to hear a little bit about accountability from him to go along with it. Unfortunately, because the true core of the voucher movement is made up of social conservatives who just want taxpayer help sending their kids to Bible schools and consider “accountability” to be a code word for an assault on religious freedom, he’s not likely to do anything of the sort.