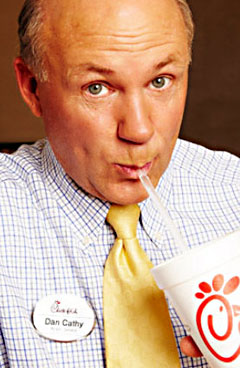 Glenn Greenwald is appalled that Chicago mayor Rahm Emanuel and Boston mayor Thomas Menino are trying to block Chick-fil-A from opening stores in their cities because the company’s CEO opposes gay marriage:

If you support what Emanuel is doing here, then you should be equally supportive of a Mayor in Texas or a Governor in Idaho who blocks businesses from opening if they are run by those who support same-sex marriage — or who oppose American wars, or who support reproductive rights, or who favor single-payer health care, or which donates to LGBT groups and Planned Parenthood, on the ground that such views are offensive to Christian or conservative residents. You can’t cheer when political officials punish the expression of views you dislike and then expect to be taken seriously when you wrap yourself in the banner of free speech in order to protest state punishment of views you like and share. Free speech rights means that government officials are barred from creating lists of approved and disapproved political ideas and then using the power of the state to enforce those preferences.

I’ll confess that I can imagine exceptions to this rule. If the Westboro Baptist Church or the KKK wanted to open a hamburger joint in Irvine, my dedication to the First Amendment would be pretty sorely tested. I suppose I’d let them in, but I won’t pretend that I might not scrutinize their applications a little more closely than usual, hoping to find a reason to turn them down.

That aside, there’s really no excuse for Emanuel’s and Menino’s actions. If you don’t want to eat at Chick-fil-A, don’t eat there. If you want to picket them, go ahead. If they violate the law, go after them. But you don’t hand out business licenses based on whether you agree with the political views of the executives. Not in America, anyway.

On a related note, what makes this whole situation so weird is that Chick-fil-A President Dan Cathy has always opposed gay marriage. He’s a devout Southern Baptist, just like his father, who founded the company. The place is closed on Sundays, for crying out loud. There’s just nothing new here.