In his big speech at Jackson Hole today, Ben Bernanke said that today’s weak economy was due not to structural factors, as some conservatives continue to argue, but is “being held back currently by a number of headwinds”:

First, although the housing sector has shown signs of improvement, housing activity remains at low levels and is contributing much less to the recovery than would normally be expected at this stage of the cycle. 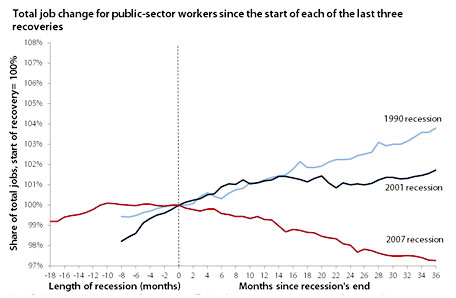 Second, fiscal policy, at both the federal and state and local levels, has become an important headwind for the pace of economic growth. Notwithstanding some recent improvement in tax revenues, state and local governments still face tight budget situations and continue to cut real spending and employment.

…Third, stresses in credit and financial markets continue to restrain the economy. Earlier in the recovery, limited credit availability was an important factor holding back growth, and tight borrowing conditions for some potential homebuyers and small businesses remain a problem today.

So does this mean that he thinks additional action is necessary? The unwritten rules of being Fed chair say that he can’t just come right out and say this, but he came pretty close:

Monetary policy cannot achieve by itself what a broader and more balanced set of economic policies might achieve…The stagnation of the labor market in particular is a grave concern not only because of the enormous suffering and waste of human talent it entails, but also because persistently high levels of unemployment will wreak structural damage on our economy that could last for many years.

…Taking due account of the uncertainties and limits of its policy tools, the Federal Reserve will provide additional policy accommodation as needed to promote a stronger economic recovery and sustained improvement in labor market conditions in a context of price stability.

The truth is that Bernanke has been saying this for a long time. Today he’s saying it a little more plainly: The economy is still weak; the weakness is mostly cyclical, not structural; that means we can do something about it; that “something” should include both fiscal and monetary action; and if we continue stalling we run the risk that our problems really will become structural and nearly impossible to solve.

In other words, he’s telling Congress to quit being so stingy because tight budgets are holding back the recovery, and he’s telling his fellow Fed members to stop making excuses and agree to additional monetary easing. Neither one is as effective by itself as they would be together.