I only watched the prime time coverage of the convention tonight, so I saw Clint Eastwood, Marco Rubio, and Mitt Romney but none of the other warmup acts.

Clint Eastwood was….about the weirdest thing I’ve ever seen at a convention. (You can watch it here.) Marian and I were just staring at each other with a WTF expression on our faces most of the time. Gesturing to an empty chair and pretending that he was carrying on an imaginary conversation with Barack Obama? Seriously? And wandering off on Afghanistan? What was that all about? As near as I can tell, he was endorsing the idea that we should pull out of Afghanistan immediately, which I’m pretty sure is not the Republican position. 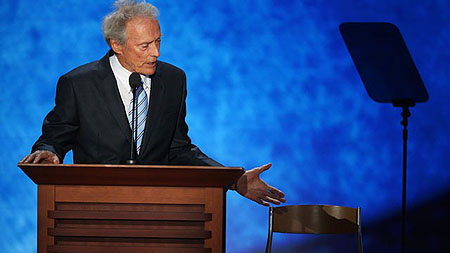 The whole schtick was just sort of embarrassing.

Rubio was fine. He didn’t say anything very memorable, but he did a workmanlike job of revving up the crowd and introducing the candidate.

As for Romney, he proved me wrong. He didn’t repeat his welfare attack lines at all, not in either a soft soap version or the gruesomely dishonest TV ad version. For the most part, I guess he was OK, but he didn’t really seem to have the crowd eating out of his hand. There were several spots where they seemed a little confused and weren’t sure if they were supposed to cheer or boo or just wait for an applause line yet to come. There were no teleprompter jokes, and no reference to the Winston Churchill bust, but there was a little jibe about Obama giving “Russia’s President Putin the flexibility he desires, after the election.” I guess that stuff never gets old. But like the teleprompter and the Churchill bust, this is just one of those weird inside baseball conservative obsessions. Outside of political junkies and Fox News groupies, I doubt that one person in a hundred watching on TV got the joke.

Beyond that, the speech felt a little blah to me. More importantly, since my judgment on these things is pretty suspect, Marian apparently found it kind of blah too. About halfway through she started checking football scores on her iPhone. Something tells me a lot of other viewers might have done that too.

Bottom line: there was nothing wrong with tonight’s performance (except for Clint Eastwood), but I doubt that it really did much for Romney. There just wasn’t enough energy, enough oomph — and the crowd reaction from the convention floor seemed kind of forced and even a little muddled at times. I predict a small bounce for Romney, but no more than a couple of points or so. Overall, it was a missed opportunity.

UPDATE: A few other reactions:

Ed Kilgore: “Biggest indication of the power & originality of this speech is that it didn’t even upset me.”

Alex Massie: “Eastwood plainly giving the father of the bride speech at a wedding at which he dislikes the groom & does not recognise his daughter.”

Andrew Sullivan: “In a word: mediocre, and deeply dishonest as an argument. As a way to soften his awful image: B +.”

Jonathan Bernstein: “A generic speech and a generic convention for a generic Republican candidate.”

The Corner: An hour after Romney’s speech ended, nothing.

Hmmm. Conservatives don’t seem very energized by Romney’s speech. Are there any conservatives with something to say? Wait a second — here we go:

Erika Johnsen at Hot Air: “Sorry to disappoint you, leftists — but Mitt Romney is a straight-up likeable dude.”

James Joyner: “If not the ‘grand slam home run’ that most pundits said he needed, at least a stand-up double, hitting the right note and continuing the process of showing that the Republican nominee is what he is: a good husband, father, and citizen.”

Joe Klein: “For the moment, he has staked his claim to decency in a country tired of phoniness and rancor. That was the most important thing about the speech tonight.”

Josh Marshall: “He’s the underdog and he’s the guy who needs to have a galvanizing introduction to the general public. In those terms, it was a missed opportunity. A pretty big one.”