According to the Pundit Responsibility Act of 1989, passed in the aftermath of George Bush’s selection of Dan Quayle as his running mate, I am required to offer up my opinions on Mitt Romney’s selection this morning of Paul Ryan as this year’s Republican vice-presidential candidate. I don’t want to do this, but the law’s the law.

I’m not sure if I’m surprised by this or not. Maybe a little. But there are certainly upsides:

For my money, the downsides aren’t very serious. Expectations of long experience have been declining for years among presidential candidates, so Ryan’s level of experience should be plenty for VP. And Ryan may not be Joe Backslapper, but he’s appealing enough in his own way. He’s also unlikely to make any major gaffes.

As for Ryan’s budget plan, with its replacement of Medicare by a voucher program, conventional wisdom says this is Ryan’s biggest drawback as a running mate. It immediately changes the Romney campaign from one about taxes and the bad economy into one about the gutting of Medicare. Maybe so. But I’m not so sure: Ryan’s budget plan probably won’t be much more of a campaign issue than it already is unless Romney explicitly re-endorses it, which I don’t think he’ll do. He’ll insist that he likes its general direction but he’s campaigning on his budget plan, and I think there’s a decent chance that everyone will go along with that.

Overall, I guess my take on this is that the Ryan pick helps Romney shore up his tea party base, but otherwise won’t have a big effect. Vice presidential choices rarely do, after all.

Oddly enough, there’s one way in which this might make a difference: if he presents such an irresistible target that Democrats take their eyes off the ball and spend too much time going after Ryan instead of Romney. Ryan is eminently attackable, and liberals loathe him enough that it will be tempting to spend a lot of time tearing him down. Take this poor fellow, for example, who’s obviously been driven out of his mind by the guy:

I’m so tired of Paul Ryan I could scream. Every year we get a slightly different version of the same old thing, and every year we have to waste entire man-years of analysis in order to make the same exact points about it. And the biggest point is that his budget would force enormous, swinging cuts in virtually every domestic program, especially those for the poor. If this bothers Ryan, he’s had plenty of time to revise his budget roadmap to address it.

But he hasn’t. He knows perfectly well that his budget concentrates its cuts on the poorest Americans. It’s been pointed out hundreds of times, after all. If he found that troublesome he’d change it. Since he hasn’t, the only reasonable conclusion is that this is exactly what he intends. Let’s stop pretending otherwise.

That would be, um, me. You can expect plenty more along those lines both here and elsewhere, but I think it would be a mistake to concentrate too much firepower on Ryan. He’s still only the VP, after all, and he’s 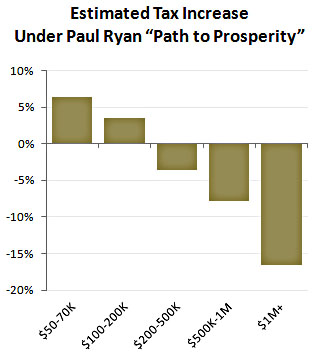 oddly resistant to demonizing. Like it or not, his persona just doesn’t make him seem very threatening. We should take our shots, but keep our eyes on the brass ring: Mitt Romney himself.

For more on Ryan and his dystopian vision for America, check out “Paul Ryan’s Path to Penury,” a quick take on Ryan’s budget, with a few more numbers added here. You should also check out this post, which is about Ryan’s refusal to name the “loopholes” he’d close in order to make his proposed tax cuts revenue neutral. This is actually sort of interesting, since it’s very similar to Romney’s refusal to do the same with his tax cut proposal. The difference is that Ryan has such a reputation as a budget nerd that he might actually try to explain himself and eventually get into trouble doing it. And also check out “Paul Ryan, Washington Charmer,” for a few tidbits about Ryan’s inexplicable hold over the DC press corps.

What else? David Corn has his take here. Tim Murphy is here. For longer takes, you might want to reread Jon Chait’s profile of Ryan from April, and Ryan Lizza’s recent profile in the New Yorker here.