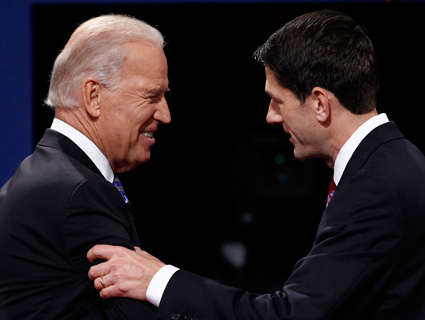 The biggest deception of the debate clearly belonged to Paul Ryan when he talked about unemployment: “You know what the unemployment rate in Scranton is today?” he asked. “It’s 10 percent. You know what it was the day you guys came in—8.5 percent. That’s how it’s going all around America.” That’s so flatly wrong I’m honestly surprised Ryan was willing to go there. The unemployment rate peaked at 10 percent in October 2009. Last month it was down to 7.8 percent. That’s how it’s going all around, and Ryan knows it.

Question: Was I the only one who found the following exchange at the end of the debate really off-putting?

MARTHA RADDATZ: I recently spoke to a highly decorated soldier who said that this presidential campaign has left him dismayed. He told me, quote, “The ads are so negative and they are all tearing down each other rather than building up the country.” What would you say to that American hero about this campaign?

RYAN: First of all, I’d thank him to his service to our country…And then I would say, you have a president who ran for president four years ago promising hope and change, who has now turned his campaign into attack, blame and defame. You see, if you don’t have a good record to run on, then you paint your opponent as someone to run from. That was what President Obama said in 2008. It’s what he’s doing right now. Look at all the string of broken promises…

The question was about negativity, and Ryan, without blinking, immediately launched into a bitter negative attack. I don’t know how many people noticed this, but it sure struck me as badly off in tone.

Joe Biden very forcefully—and repeatedly—insisted tonight that Iran was nowhere near getting a bomb and it wasn’t really something to worry about right now. Was this a good line to take? Substantively, he has a good argument: Iran isn’t close to getting a bomb, and Iran doesn’t have a delivery vehicle in any case. But 10 years of warmongering has made me skeptical that this is a good tack to take. It sounds weak and naive. I sure hope I’m wrong about that.

Andrew Sullivan, who had by far the biggest freakout over Obama’s performance last week, is apparently happier tonight: “I have to say that Biden did to Ryan what Cheney did to Edwards [in 2004] in style and demeanor and authoritah. Ryan was hampered by an insurmountable problem on the impossible mathematics of the Romney budget. I think his inability to answer that question—how do you pay for it?—has to be the driving question now.”

David Roberts:  “The GOP complaint, if I’m hearing them correctly, is that Joe Biden smiled & laughed too much while kicking their candidate’s ass.” Yeah, pretty much. The Fox News crowd is going absolutely nuts over Biden’s smiling and laughing. I guess I don’t blame them, really. I probably would too if I were them. Partly this is because I think Biden overdid things on this score, but mostly because it’s a lot easier than trying to take on the substance of the debate, where Biden pretty clearly got the better of Ryan. However, this will be a good test of the right’s ability to drive the media conversation. Conservatives are going all in about how condescending and inappropriate and just plain insulting Biden’s laughing was, and how it’s really the big takeaway from the debate. (Karl Rove: “It’s what people will remember 20 years from now.” Greta Van Susteren is just flatly insisting that this ought to be the main media narrative in the morning.) But they’re obviously protesting too much. I don’t think it will fly this time.

Martha Raddatz is getting good reviews from everyone except Sarah Palin, who says “Paul Ryan was underfoot” the entire debate because Raddatz let him run roughshod. Sean Hannity then made a remark about Obama attending Raddatz’s wedding 20 years ago. Good grief.

Look, if you taxed every person and successful business making over $250,000 at 100 percent, it would only run the government for 98 days. If everybody who paid income taxes last year, including successful small businesses, doubled their income taxes this year, we’d still have a $300 billion deficit. You see? There aren’t enough rich people and small businesses to tax to pay for all their spending.

And so the next time you hear them say, “Don’t worry about it, we’ll get a few wealthy people to pay their fair share,” watch out, middle class, the tax bill’s coming to you.

That’s kind of breathtaking, no? First, he says that ending tax cuts for the rich wouldn’t solve the entire deficit problem all by itself, so therefore we shouldn’t do it. Huh? Then he attempts some jiu jitsu by suggesting that if you’re in favor of partly solving the deficit problem with tax hikes on the rich, then “watch out, middle class, the tax bill’s coming to you.” Double huh? I wonder if anyone fell for that?

Ezra Klein tweets: “Ryan is better at talking entitlements than Romney. He sounds excited about the changes for his generation. Romney makes them sound terrible.” There’s some truth to this. Ryan has a remarkable ability to make his cuts sound really appealing. I attribute this partly to the fact that he really believes what he says, and partly to the fact that so many young people are convinced that Medicare and Social Security won’t be there for them unless they’re cut. They believe this, of course, mainly because people like Paul Ryan have been telling them this for so long.

By the way, Biden didn’t use the word “literally” a single time tonight.

And hey—how did the hack gap make out tonight? Matthew Cain: “Starting to believe @kdrum.” Michael Linden: “@kdrum’s hack gap is on full display tonight. If the performances were reversed, liberal pundits would be in full retreat.” Ryan Cooper: “The hack gap is on prominent display after this debate. Right rallies around Ryan.” Yep.

Finally, what did my own personal focus group have to say about the debate? According to Marian, Ryan looked like an “entry level” vice president. Very perceptive, I’d say.