Mitt Romney apparently still thinks that downsizing and privatizing the functions of FEMA is a good idea. After all, everyone knows that federal bureaucracies are cesspools of incompetence.

Except….it turns out that they’re only cesspools of incompetence during certain eras. See if you can spot the trend here:

George H.W. Bush: Appoints Wallace Stickney, head of New Hampshire’s Department of Transportation, as head of FEMA. Stickney is a hapless choice and the agency is rapidly driven into the ditch: “Because FEMA had 10 times the proportion of political appointees of most other government agencies, the poorly chosen Bush appointees had a profound effect on the performance of the agency.”

Bill Clinton: Appoints James Lee Witt, former head of the Arkansas Office of Emergency Services, as head of FEMA. The agency is reborn as a professional operation: “As amazing as it sounds, Witt was the first FEMA head who came to the position with direct experience in emergency management….On Witt’s recommendation, Clinton filled most of the FEMA jobs reserved for political appointees with persons who had previous experience in natural disasters and intergovernmental relations.”

George W. Bush: Appoints Joe Allbaugh, his 2000 campaign manager, as head of FEMA. Allbaugh explains that his role is to downsize FEMA and privatize its functions: “Expectations of when the federal government should be involved and the degree of involvement may have ballooned beyond what is an appropriate level. We must restore the predominant role of State and local response to most disasters.” Once again, the agency goes downhill: “[Allbaugh] showed little interest in its work or in the missions pursued by the departed Witt….Those of us in the business of dealing with emergencies find ourselves with no national leadership and no mentors. We are being forced to fend for ourselves.”

Allbaugh quits after only two years and George W. Bush downgrades FEMA from a cabinet-level agency and appoints Allbaugh’s deputy, Michael Brown, former Commissioner of Judges and Stewards for the International Arabian Horse Association, as FEMA’s head. A former employer, Stephen Jones, is gobsmacked when he hears about it: “Brown was pleasant enough, if a bit opportunistic, Jones 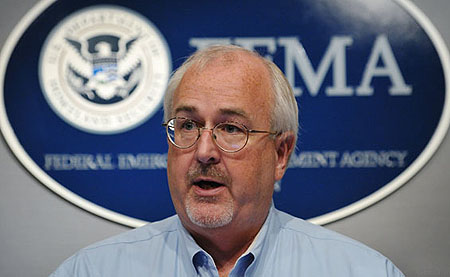 said, but he did not put enough time and energy into his job. ‘He would have been better suited to be a small city or county lawyer,’ he said.”

Barack Obama: Appoints Craig Fugate, Florida’s state emergency management director, as head of FEMA. Fugate immediately revives FEMA, receiving widespread praise for the agency’s handling of the devastating tornadoes that ripped across seven Southern states last year: “Under Fugate’s leadership, an unimaginable natural disaster literally has paved the way for a textbook lesson in FEMA crisis management….Once the laughingstock of the federal bureaucracy after the bumbling, dithering tenure of director Michael Brown, FEMA under Fugate prepares for the worst and hopes for the best rather than the other way around.”

More on this subject from Jon Cohn here and Ed Kilgore here.