The New York Times reports that high frequency trading is on the decline:

Profits from high-speed trading in American stocks are on track to be, at most, $1.25 billion this year, down 35 percent from last year and 74 percent lower than the peak of about $4.9 billion in 2009….While no official data is kept on employment at the high-speed firms, interviews 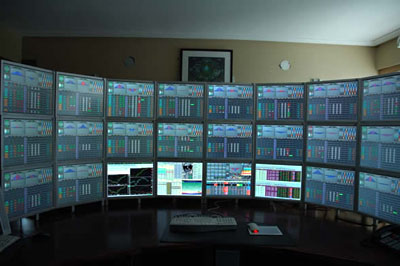 with more than a dozen industry participants suggest that firms large and small have been cutting staff, and in some cases have shut down.

The usual wheeze to justify HFT is that it provides greater liquidity, which benefits even small traders. But the stock market had always had plenty of liquidity. It’s a textbook model of liquidity. So there’s really not much upside there, and the downside is that no one truly understands what all the HFT algobots are doing. Maybe they’re harmless. Then again, maybe they only seem harmless when markets are calm. But when things get a little out of whack — in other words, at the worst possible time — there’s no telling what the algobots will do. Their programmers certainly don’t, and that’s reason enough to think we should be pretty careful with this stuff.

But Felix Salmon highlights another reason we should keep HFT on a short leash. It turns out that HFT algobots don’t actually do that much trading. What they do is produce massive amounts of financial spam: putting out buy and sell orders and then rescinding them almost instantly. In other words, quote stuffing and market spoofing. And the target of all this fake trading is….other algobots:

Call it the Stalemate of the Spambots: the HFT algos are all so sophisticated, now, that they just ping each other with order spam, rather than actually trading shares. Naturally, if you don’t trade shares, you can’t make money. But at the same time, anybody who does trade shares risks getting picked off by the very algorithms which are increasingly circling each other like prizefighters who never land a punch.

All of which is to say that just because HFT algobots aren’t trading as much any more, doesn’t mean that the waters are any safer for real-money accounts to re-enter. Indeed, the exact opposite is more likely: that the bots have poisoned the stock-trading waters so much that even the bots themselves fear to go in.

Felix thinks the answer is a financial transaction tax. “Let’s not assume that rising trading costs are always and necessarily a bad thing,” he says. I agree. CEPR has more here.