See if you can spot the common theme in three different pieces that I happened to read today. First up is “Obama’s Game of Chicken,” a piece in the Washington Monthly that tells the story of how small chicken farmers are now practically indentured servants to big poultry processors. The evolution of the industry started in the 50s, when processors changed from an open-market model to a contract model, but things remained 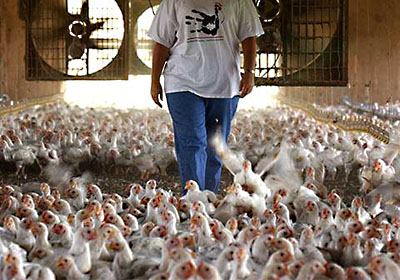 OK all the way through the end of the 70s:

If a farmer didn’t like the terms offered by one company, he could, at the end of the contract period, simply switch to another. The basic balance of power between the farmers and the companies remained in place.

The change that finally upended this balance came in 1981. A group of Chicago School economists and lawyers working in the Reagan administration introduced a new interpretation of antitrust laws….Under Reagan, the Department of Justice narrowed the scope of those laws to promote primarily “consumer welfare,” based on “efficiency considerations.” In other words, the point of antitrust law would no longer be to promote competition by maintaining open markets.

….Although the change was strongly opposed by centrists in both parties, a number of left-wing academics and consumer activists in the Democratic Party embraced the new goal of promoting efficiency. The courts also soon began to reflect this political shift….In 1980, the four biggest meatpacking companies in the country controlled 36 percent of the market. Ten years later, their share had doubled, to 72 percent.

Next up is “Last Call,” another piece in the Washington Monthly, about the fact that two gigantic multinational corporations now control manufacturing and distribution of 80 percent of the beer sold in America:

Prior to the 2008 takeover, Anheuser-Busch generally accepted the regulatory regime that had governed the U.S. alcohol industry since the repeal of Prohibition. It didn’t attack the independent wholesalers in control of its supply chain, and generally treated them well. “Tough but fair” is a phrase used by several wholesale-business sources to describe their dealings with the Busch family dynasty. Everyone was making money; there was no need to rock the boat.

All that changed quickly after Anheuser-Busch lost its independence….Today, with only one remaining real competitor, MillerCoors, the pressure it can put on its wholesalers is extraordinary. A wholesaler who loses its account with either company loses one of its two largest customers, and cannot offer his retail clients the name-brand beers that form the backbone of the market. The Big Two in effect have a captive system by which to bring their goods to market.

Finally, here is Tyler Cowen on how he expects the publishing industry to evolve:

I expect two or three major publishers, with stacked names (“Penguin Random House”), and they will be owned by Google, Apple, Amazon, and possibly Facebook, or their successors, which perhaps would make it “Apple Penguin Random House.” Those companies have lots of cash, amazing marketing penetration, potential synergies with marketing content they own, and very strong desires to remain focal in the eyes of their customer base. They could buy up a major publisher without running solvency risk. For instance Amazon revenues are about twelve times those of a merged Penguin Random House and arguably that gap will grow.

I made it too easy, didn’t I? For more to cogitate about here, you might also want to revisit a recent 60 Minutes program about the eyewear market, and also think about how well the consolidation of the financial industry has worked out for us over the past decade or two.

Both parties, but Republicans especially, mostly spend their time protecting not the free market, as they insist, but big business interests. This is decidedly not the same thing, and it might well be that three or four vertically integrated giants in practically every industry isn’t really all that good for the rest of us. This is just a thought, but in the long run, maybe competition really is a good thing.