Previous Democrats, notably Bill Clinton, raised taxes, but still understood capitalism. Bashing business seems second nature to many of the people around Mr Obama. If he has appointed some decent people to his cabinet—Hillary Clinton at the State Department, Arne Duncan at education and Tim Geithner 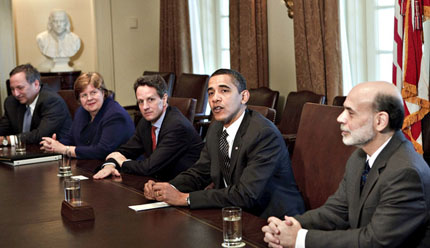 at the Treasury—the White House itself has too often seemed insular and left-leaning.

This is crazy. As the Economist points out, Obama appointed Tim Geithner at Treasury. He reappointed Ben Bernanke at the Fed. His top White House advisor was Larry Summers, a protege of Robert Rubin and an alumnus of the Clinton White House. He appointed Peter Orszag as director of OMB. He hired Wall Street financier Steven Rattner to manage the Detroit rescue. He appointed Paul Volcker, the man who saved us from stagflation, as chair of his Economic Recovery Advisory Board. And he appointed Christina Romer as chair of the CEA—a lefty, perhaps, but certainly not a business basher. Every progressive pundit I know, from Paul Krugman on down, has mostly complained that Obama’s economic team was too centrist, too mainstream, and too Clintonian. The idea that these folks are somehow unenlightened about capitalism is laughable.

The Economist also has a weird complaint that Obama “surrendered too much control to left-wing Democrats” over Obamacare—in reality, he didn’t surrender to them, he was forced to deal with them because Republicans refused to offer any of their votes in return for centrist compromises—but I’ll let that go. Instead, I’ll just turn the floor over to Matt Yglesias, who has the right critique of the Economist’s wrongheadedness:

This idea that sound economic policy derives from palling around with job creators is one of the most pernicious myths out there today. And when you think about it, it undermines the whole logic of capitalism. The Soviet Union desperately needed politicians who understood agriculture, industry, and commerce because Soviet politicians were running the whole economy. In America we don’t do that. What the president has to do well is the things that he’s in charge of—being the single strongest voice in public policy disputes.

I think the best example of this is the first term of Franklin Delano Roosevelt. Businessmen really didn’t like the guy. But the economy grew like crazy during his first four or five years in office. Why was there such strong growth? Primarily because FDR took the United States off the gold standard. That was a great idea, though it was much-criticized by business elites at the time. Tellingly, even when the policies were clearly working and the economy was growing again after years of collapse, businessmen didn’t change their mind about FDR. Which doesn’t show that they’re bad people or bad businessmen, simply that they were really bad at public policy analysis. Which is fine, because just as we wisely don’t have politicians running businesses we also wisely don’t have businessmen running the government.

Could Obama have used a few more CEOs in his economic team? Maybe—although I doubt that it would have mollified the business community or changed the political realities of Capitol Hill much. But look. Geithner’s job was to support higher capital standards for banks whether banks liked it or not. Summers’ role was to help pass new financial regulations whether financiers liked it or not. Obama’s role was to pass healthcare reform whether the CEO of Walmart liked it or not. All of these things might have turned out better if Republicans had shown any interest in working together on them, but they didn’t. That was the hand Obama was dealt.