David Frum has a very odd endorsement of Mitt Romney today. The endorsement itself isn’t odd: Romney’s a conservative and Frum’s a conservative, so you’d pretty much expect Frum to support him. But what a peculiar bunch of reasons he gives. First, he figures that Obamacare will survive no matter what, so he’d rather have a Republican in charge of implementing it. This is….not consistent with reality. Obamacare will be effectively wiped out if Romney is elected. Frum also has a peculiarly hostile reading of Obama’s Osawatomie speech from last year, which he thinks is an indication that Obama wants to vastly expand government employment. As Keith Humphreys points out, Obama sure has a funny way of showing this: 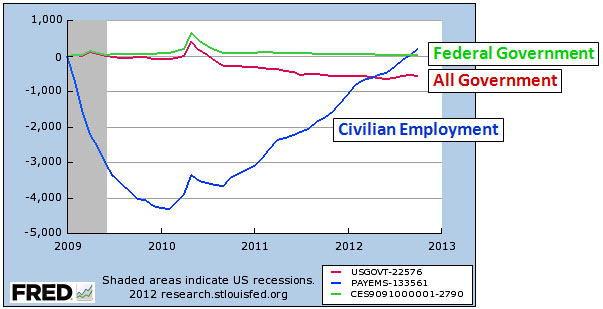 Frum also believes that if the federal government needs new revenue, it shouldn’t come from higher income taxes. Instead it should come from carbon taxes and consumption taxes. Fine by me! But surely he knows that Romney and the Republican Party are, if anything, more hostile to those taxes than they are even to income taxes?

But all this is just a warmup. Here’s the head slapper:

Holy cats. First of all, this is almost certainly wrong. A Republican win would embolden congressional Republicans. They’d take it as a sign that they were right all along, that America really is a conservative nation and really does want to be governed according to tea party principles. They’d be over the moon with faith in their own righteousness and would demand absolute fealty from Romney. Sure, they’d ease up on things like debt ceiling hostage taking, but not on much of anything else. The tea party wing of the GOP would be reenergized and in no mood to feel like they had to compromise their principles even a little bit.

A loss, on the other hand, might have a salutary effect. It’s no sure thing, but it just might start some real grumbling among the business class that bankrolls the GOP and the moderate class that’s never gotten along with the tea party in the first place. It’s really the only hope there is of provoking the Republican Party to eventually deal with its crackpot wing.

But instead, Frum makes the most overt form of the surrendering-to-terrorists argument that I’ve seen yet. If Obama wins, congressional Republicans will go completely ape and destroy the country. They will deliberately tank the economy and then impeach the president. Therefore, we have to give into them and turf Obama out of office.

It’s appalling that people are seriously making this argument. What’s worse, it’s the relatively sensible people who are making it. This is simply nuts. No country can survive with this attitude. If congressional Republicans are truly a destructive and irrational force in American politics—and God knows, I agree with Frum about that—the answer is to fight them, not to surrender to them. That way lies madness.