Here is the most depressing thing I’ve read today:

Seven minutes into the first presidential debate, the mood turned from tense to grim inside the room at the University of Denver where Obama staff members were following the encounter….“We are getting bombed on Twitter,” announced Stephanie Cutter, a deputy campaign manager, while tracking the early postings by political analysts and journalists whom the Obama campaign viewed as critical in setting debate perceptions.

….Mr. Obama, who had dismissed warnings about being caught off guard in the debate, told his advisers that he would now accept and deploy the prewritten attack lines that he had sniffed at 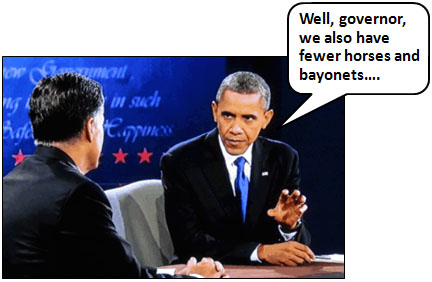 earlier. “If I give up a couple of points of likability and come across as snarky, so be it,” Mr. Obama told his staff.

I understand the political realities as well as anyone. But the idea that the President of the United States was forced to respond to poor reviews on Twitter (!) by promising to memorize attack zingers is pretty deflating. I know this is actually perfectly rational under the circumstances, but I still hate having my nose rubbed in how dumb our political discourse makes us sometimes.

And speaking of that, have I mentioned before that I’ve always felt kind of sorry for Mitt Romney? Aside from the fact that he’s rather more comfortable with transparent lies than I am, he actually seems like a decent guy with decent instincts. Sure, he wanted to be president really, really badly, but lots of people want to be president a little too eagerly for comfort. It’s an occupational hazard of the office. Unfortunately for Romney, he happened to want to be president in an era when the Republican base forced him to embrace lunacy in order to win their support. So he did what any good businessman would do: he gave the customers what they wanted. And lost.

But you know what? It was a close election. Obama really was vulnerable. And even granting that Romney is a pretty stiff campaigner, I’ll bet that if he’d run as the same center-right guy who was governor of Massachusetts for four years, he would have won. After all, there were obviously a lot of people out there who were looking for a moderate, competent alternative to Obama, and if Romney had been allowed to campaign as that kind of candidate for four years instead of just the final four weeks, does anyone really think he wouldn’t have been able to attract another percentage point or two in the key swing states?