Among other things, Austin Frakt has taught me to view the healthcare market as a competition between providers and insurance companies. If you have a market served by lots of hospitals and only one or two insurance carriers, then the insurance companies have a lot of leverage: they each represent a huge chunk of the customer base and can threaten to take their business elsewhere if a hospital charges too much. In the opposite situation, with only one or two hospitals in a region, they’re the ones with the leverage. Even if their prices are high, insurance companies can’t withdraw their business because there are no other choices available.

What this means is that “more competition” doesn’t necessarily lead to lower prices. Over at Economix, a trio of researchers confirms this using a state-by-state comparison:

We examined the relationship between insurer market power (defined as the market share of the two largest companies) and changes in premiums. We found that concentration of insurer power — hence 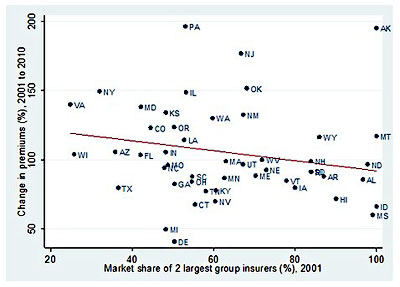 less competition — was not significantly associated with higher premiums, as can be seen in the chart below.

In English, this means that a small number of big insurance carriers generally led to lower premiums:

Hawaii is a good example. Kaiser Permanente and Blue Cross Blue Shield together controlled more than 90 percent of the insurance market in 2001. In this highly concentrated market, the average premium rose only 72 percent over the decade, compared to an overall increase of 135 percent nationwide. By contrast, Virginia had one of the most competitive markets in 2001, with its two largest insurers controlling only 25 percent of the market, yet premiums in the state increased nearly 140 percent over the period.

I’ve never been persuaded that insurance companies provide any real benefit in the healthcare market, since what they offer is only barely “insurance” in the usual sense. Mostly they’re just intermediaries, with their market power to drive down prices slightly outweighed by their high administrative costs. Net effect: pretty close to zero. It’s providers and consumers who really drive prices, not the middlemen. Still, this study suggests that as long as we’re stuck with private insurance companies, we’re probably better off with a few big, powerful ones. Competition between insurers is just another way of giving providers more leverage, and they’re the ones who really control prices.

UPDATE: If you want things straight from the horse’s mouth, here’s the Austin Frakt version of all this.